XD is my Favorite Disc

Hi, my name is Steve Lee. I live in the Pacific Northwest and have been playing Disc Sports since the 1970s. Back then, Frisbees were the thing to fly, and after discovering the world of disc golf, I was hooked! My Frisbee of choice was the 70-mold Midnight Flyer. I loved its grip, and immediately began looking for heavier 70 molds to throw. Another Disc wowed me, “The Puppy” by Destiny Disc, a Jan Sobel creation. With my collection of Frisbees and discs, my Disc Golf game was now on solid ground. 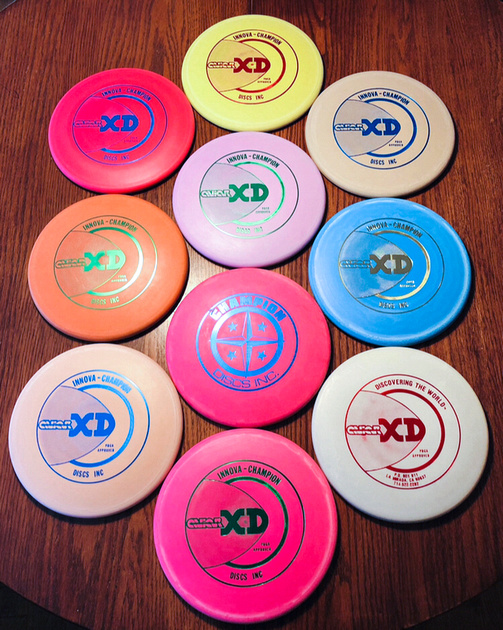 In 1980 Rockwood Disc Golf Park opened in the outer realms of Portland, Oregon. It was the state’s first Pole Disc Golf Course, created by the legendary “Steady” Ed Headrick with collaboration from Lowell Shields. It’s an 9.4-acre, 9-hole course that celebrates its 40th Anniversary this month (Sept. 2020)! From the time it was built, Rockwood has been a challenging and fun course to test your Disc Golf skills—and was instrumental in the development of my disc golf skills.

By 1983 our flying discs were dramatically changing. No longer were discs deep, large, and bull-nosed, but rather smaller in diameter, heavier, and with beveled edges. Innova-Champion began manufacturing discs, changing the game as we knew it. Their first bevel-edge discs and—most important to me—was the wonderful DX plastic. It felt like butter, gripped like a sponge, and was indestructible.

At this time DX was the only plastic in existence, and is still produced and used today. DX plastic is durable and grips easily. For me, DX plastic is usually my top choice for wet and cold conditions—perfect for the grey, drizzly Pacific Northwest weather that surrounds me. I found that certain colors of DX plastic were more durable than others. Orange color is the most durable for some reason, followed by the pink and red.

Innova-Champion's first creation was the Eagle, followed by the Aero, the Aviar, and in 1984, the XD—my favorite being the Aviar XD. The name “XD” stands for “eXtra Distance.” This disc was heavier, smaller in diameter and had a lower profile, like “The Puppy” I mentioned earlier. This quickly became my go-to. After losing a few of these beloved discs to trees and bushes, I began collecting them for backups. I simply could not stand to be without an XD in my bag!

Aviar XDs were originally produced in San Marino, California, and came in just a few colors: pink, red, yellow and creamy white. Then the mold was re-tooled and the XD lost its big brother Aviar association. The new XD had a much lower profile compared to the Aviar, and flew faster.

The first hot stamps on the XD were known as the “Bullet” stamps. If you look closely you can see the nose of a bullet piercing through the stamp from left to right. The first “Bullet” stamp XDs has “Aviar – XD” visible on the “Bullet”. In the mid-to-late 80s, the word “Aviar” was dropped from the stamp. Since then, all other “Bullet” stamped XDs have had this simplified style of stamp.

The first “Bullet” stamped XDs were produced with San Marino, CA and Ontario, CA tooling. By the 1990s, the San Marino mold gave way to the re-tooled Ontario mold. The difference to me is that the San Marino tooled disc is more a domed shaped, while the Ontario molded disc is flatter. I, along with many other throwers of the XD, now consider the Ontario mold our favorite. To this day, nearly 30+ years later, players such as myself search the world over to obtain these awesome discs. The XDs are solid, dependable discs that make a huge difference in my game—and are addicting to collect. 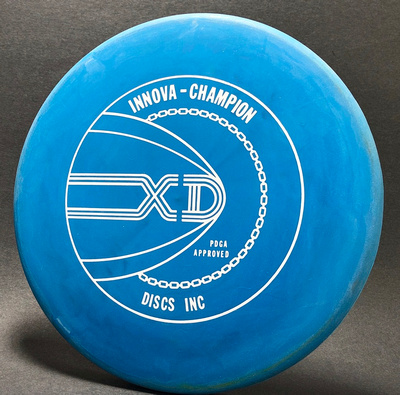 Grab an XD “Bullet” and try it for your short game, 30 meters and in!

Cary L(non-registered)
Great post Steve! I recently discovered the remains of my original Aviar XD in the bottom of my first disc golf “bag” while cleaning out the garage. I had used it only a few rounds when I hit a tree full on. It was a fairly cold day in Ponca City, Ok at War Memorial park and the XD cracked down the middle even through the rim. The originals must have been pretty brittle (or maybe it’s just me). I bought another XD when I started playing again in the mid-nineties and enjoyed it for many upshots.
Karen Royea(non-registered)
Steve, thank you so much for sharing. I have had an XD in my bag since I first played at a World’s Biggest tournament as a Womens’-Rec player in Wisconsin in the early 1990s. My first orange one lasted through every year and every division to my first year as a Pro in 2001. Every hole it was my approach disc - regardless of direction and anywhere from 20-150 feet. And I could not beat it for a scramble shot. Developed an awesome hammer getting out of a fair amount of wooded rough. One of my fondest memories was hearing Juliana Korver compliment a hammer I landed over a stand of birch trees, uphill, about 100 feet away. While my orange ones have been retired, I still use a grey Ontario mold now as I start tournaments again. (Took a raising kids hiatus from competition.) For me, XD has been a reliable disc that has enough touch to do what I am thinking.
Michael Yarbrough(non-registered)
I have one. Old and beat up but still pretty solid. Are these worth anything? Id be willing to part with it knowing it's going to join its brothers. Lol. And I found it and never throw it.
John Riley(non-registered)
Thanks for the story Steve!
A few years ago, around the time when Innova moved to their bigger warehouse, they shipped a box of old XD's with Factory X-Out stamps on them to the local shop at Kit Carson Park in Escondido. A couple of my buddies bought up the whole supply of them and were nice enough to give me a couple. They are my putters and I love em just like you. These are the flat topped ones so they must be from the Ontario location. I've never seen another disc with that low profile and feel of plastic.
Thanks again for the background info!
No comments posted.
Loading...
Subscribe
RSS
Recent Posts
Mini Mania—mini discs keep good company! K-9 N-Counters Frisbees Unleash Neuroresponses: The Science of Collecting From Great Heights 'Twas the Night Before Rose Bowl Kaposia Community Makes a Meaningful Difference for the Paul McBeth Foundation Learning to Throw The Complete Spin... A YEAR IN REVIEW The Wham-O Trademark Band The Perfect Putt!
Keywords
Disc Golf Collecting Distance Ultimate Frisbie's Pies DGA Midnight Flyer Minis Promotional Disc Dog
Archive
January February March April May June July August September October November December
Photo copyrights belong to their respective contributors, disc design copyrights belong to their designers
User Agreement
Cancel
Continue