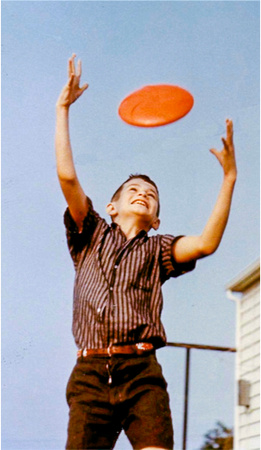 It wasn’t always so. When flying discs first hit the markets and blew our minds in the ’50s, they were “just” an extraordinary toy. And, they were truly mind blowing. There are lots of stories of how folks reacted upon first seeing one fly. Maybe you’re lucky enough to remember your own experience. I can’t specifically remember. I know I got that Pipco Flyin’ Saucer as a gift on my fifth Christmas, and I know that Dad and I started playing immediately, but I don’t specifically recall my amazement when I first saw the flight. Probably everyone who first saw a plastic disc fly was similarly amazed. That’s how Fred and Lu sold the “invisible string” at the Los Angeles County fair. The saucer fooled the eye. It was something magical.  Fortunately, I had a few chances much later in life to see that reaction in others. When Jo and I toured Australia in 1977, we had several opportunities to show people their first flight. And, just like Fred and Lu, we could have sold some invisible string. It was a pretty reasonable explanation.

So, when we first had these amazing toys in our hands, the joy of playing with them was complete. At that moment, it takes a pretty unusual person to say, “You know, I think I’m going to buy a few sets of these in all the different colors and keep them in those poly bags as collector’s items. And wow, look at that interesting esker. I’ll get a few of those as well.” Nope … we ripped those platters out of the bag and gave them a fling! We didn’t need any stinkin’ instructions. All we needed to know was engraved in the plastic. I played almost every day of my life from 1953 through 1973 and I’m amazed (and embarrassed) to say that I never even noticed that the discs had any mold markings. I was absolutely clueless until I met Roger Barrett at the IFT and he patiently explained to me that those little numbers were pretty important. Meeting the folks from the Berkeley Frisbee Group was mind-expanding for me in many, many ways, but Roger (and Victor) opened the door for me about so many hitherto unnoticed aspects of the discs in our hands. There I was with twenty years of play under my belt and I felt like I had just been introduced to the sport. It’s also the weekend that I (and my little buddy, Jimmy Scala … yes, that Jimmy) saw our first the sidearm from Victor and tipping from Alan Blake. We had a lot to digest on the drive home ….

But, back to the oddity of actually collecting these toys. It really had never crossed my mind. I had a few, but they were all throwing stock; every single one. For most of those 20 years, we only had one disc. How many could you need? And, that one disc was an almost constant companion. Amazingly, I still have what I think was my second disc, after the Pipco. You can see that I gave it a cool, custom racing stripe. On the underside, I added my initials with my Boy Scout wood burning tool.

However, that IFT weekend changed everything for me. Back in Jersey, we were just firing up the mimeograph machine for the first issue of Flying Disc World magazine. Pretty fancy production, huh? We would sneak into the secretary’s office at the Rutgers Mental Health offices (don’t ask …) late at night and run our copies on the mimeo machine. That kept production costs pretty low. We started with about 24 subscribers and promised them 5 issues per year for $3. The first issue, which you can check out here covered a pretty wide array of disc-worthy news, but for the purposes of this article, the most important was a feature piece by R.W. Barrett titled, An Introduction to Flying Disc Collecting. In that short column, Roger laid out the basic roadmap for all of the collecting madness to follow. In an editorial comment at the end of Roger’s cartography, I added some notes that are now a useful measure of the very earliest collecting activity. See if you can make out our fancy printing:

So apparently in 1974, Roger was the disc collecting king of the world with 485 different discs. But a few others had also caught the fever and were not far behind. In the second issue of FDW, Roger starts to fill in some details as he lays out some of the collecting highlights from The early years: 1948-1962. And, the race was on! Still at the time, I don’t think I had any non-throwing discs. I had just met Gary Seubert, who was to become my collecting/organizing and publishing partner, but we had nothing.

It’s worth remembering that when Goldy Norton published The Official Frisbee Handbook in 1972, he included some pictures of a variety of discs, but no direct mention of collecting. Also in ’72, Roger had printed up a few copies of his Vestpocket Guide to Frisbee Selection, which was particularly focused on the Pro model. By 1975, when Stancil Johnson followed up with his much more “definitive treatise,” collecting was a major part of the conversation, including very detailed nomenclature and categorization of all the then-known discs. So, in a relatively short time, knowledge about collecting took a huge jump. In ensuing years, collecting moved forward on several fronts. Frisbee World magazine had many features on collecting and offered limited edition items for mail order sale in The Factory Connection. Looking back on those pages now, the prices seem pretty fair. A replica (white) run out of the Mystery Y mold was advertised for $5 plus 25 cents handling. A collector’s run of 25 141G Black Jimmies went for $20 each (no more than two to a customer). At various times, sweet items like one-of-a-kind Super Pros would pop up for sale. Think metal flake and pearlescent, for tasty examples… 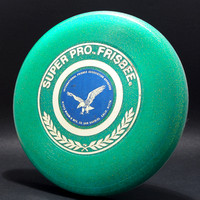 Many, many more of us got seriously into collecting during this period. Of course, it was big fun, because any garage sale might net you a Pluto, Sailing Satellite or Space Saucer. Lots of tasty fruit hung low on the tree. I trust that future articles in the blog will cover some of the epic collections that were developed. For the sake of our shared history, it would be great to see those early efforts carefully documented.

But, least for me, that’s how I belatedly became aware that these discs that had already fascinated me for 20 years, held much more intrigue to be explored. Thinking back now over what has been almost 50 years of collecting fun I realize that flying discs have so many features that combine to make them one of the most compelling collectible items. I know that lots of people have fun with stamps and coins and shot glasses, but discs are just … better. 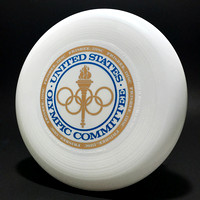 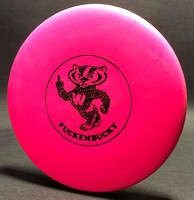 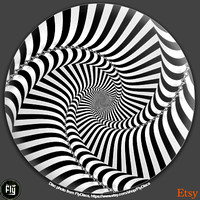 So … although I’m trying hard to be objective here, there really isn’t any other collectible that has so many appealing aspects. “Hey, check out my beer coaster collection! There’s this side, with the printing and then there’s this other side … OK then ….”

I’m really just surprised that I didn’t figure this out much earlier. I mean, in the summer of 1969, Ed sent me a big box, stacked full of colored Pros to run the New York State Championships at Chautauqua. I actually gave them out! What was I (not) thinking?

So, my profound thanks to Roger and all of the dedicated and helpful collectors who have followed him. It’s been such great fun.

Hollis Brandenburg(non-registered)
Started throwing in the early 60’s. Addicted by college in 1972. Loved 119g, Moonlighter, and SuperPro models. A world class Frisbee dog found me in 1976. It was impossible to keep a virgin Frisbee around him. Always had a Frisbee on vacations and backpacking trips. Still like a good toss, can’t crank it like the old days. I’m 67 now.
Jumpin' Joe Feidt(non-registered)
I notice in that early newsletter's masthead, you're Dan "The Stork" Roddick. When did you drop the "The" before Stork? Also, what does F.M. stand for after your names? I'm guessing Frisbee Master.

You're not a bad writer. I might have a job for you, kid. And don't call me Chief!
Billie Sage Ashton
Stork...Nicely done! Way to open the newly established FDM blog feature, with without a doubt, the perfect well written piece on disc collecting! I believe the blog addition here at FDM, will swiftly become another interesting dimension to contributing. I hope many will pick up a pen to share their disc experiences, stories and historical facts, because they're certainly worth telling, documenting and reading.
Flying Disc Museum
Stork, thanks so much for the informative article! I came into the scene (late 1979) when collecting was already well established and absolutely adored going to the auctions at the WFCs to fondle plastic for hours on end. I loved everything about collecting and still do. The museum and the disc community at large thank you for your countless contributions to our fun!!!!!
JENS VELASQUEZ(non-registered)
Stork thanks so much for the history lesson! I think back and realize that my first throw was in the spring of 1974 (black Master) and a year later I picked up a few 1975 Octad Super Pros for a couple of bucks! Could really use a time machine :-) Great job Stork & FDM!
No comments posted.
Loading...
Subscribe
RSS
Recent Posts
Mini Mania—mini discs keep good company! K-9 N-Counters Frisbees Unleash Neuroresponses: The Science of Collecting From Great Heights 'Twas the Night Before Rose Bowl Kaposia Community Makes a Meaningful Difference for the Paul McBeth Foundation Learning to Throw The Complete Spin... A YEAR IN REVIEW The Wham-O Trademark Band The Perfect Putt!
Keywords
Disc Golf Collecting Distance Ultimate Frisbie's Pies DGA Midnight Flyer Minis Promotional Disc Dog
Archive
January February March April May June July August September October November December
Photo copyrights belong to their respective contributors, disc design copyrights belong to their designers
User Agreement
Cancel
Continue