This is a tale of my many varied and zany efforts to pitch (or perhaps “fly”) the idea of a mini frisbee to prospective advertisers to promote their product in a unique fashion. What better way to get your message across to consumers than a little indestructible plastic disc that connects to their inner kid in a playful yet subliminal way and can be used as a coaster, a calling card or a lid and not just a toy? 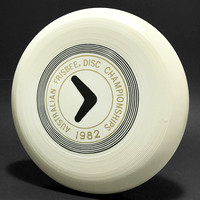 I had just won the overall Frisbee® and Flying Disc Championship title in Perth in 1982 and had stopped midway on my flight back to Melbourne to drop into Adelaide to meet entrepreneur and Frisbee fanatic Neil Williams.

Neil was a director of SACRA (South Australian Community Recreation Association) and was instrumental in Brian Vanallen and my efforts to establish three disc golf courses in Adelaide—north in Salisbury, central CBD in Bonython Park and south in the parklands of Noarlunga.

He and I were obsessed with the idea of using a mini frisbee as a container lid for different consumer products, and then using me—as the Australian champ—to promote those particular products for the sponsor. It was now a prime time to pitch this idea to corporate Australia.

We had just spent almost an entire year trying to convince PAL dog food manufacturer to use a mini disc on their popular brand of dog food and failed to convince the boardroom sceptics that a disc would be a great way to seal up the half-used can of dog food in the fridge instead of a patch of aluminium foil or plastic wrap. They said our disc was too dear!

But Neil and I weren't ones to give up easily and we had another brainwave. 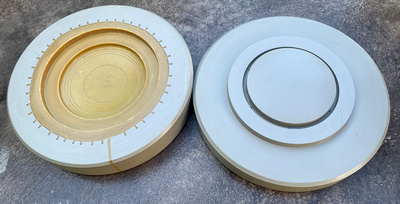 Adelaide boasted a huge industrial area just outside the central CBD area—on Port Road, Coca-Cola Amatil had built a large bottling/canning factory. We thought that a mini disc to cover their new aluminium cans was a great idea and went about getting a temporary mold made and samples produced. 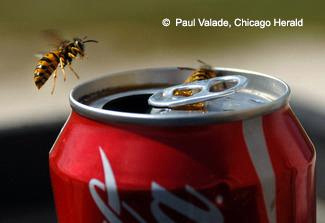 Hornets in Coke can

The discs were made from a light, strong plastic similar to ping-pong ball celluloid and were designed to fit snugly over the edge of the can to seal the drink. You have to understand at that time the press had made a huge issue of wasps and hornets 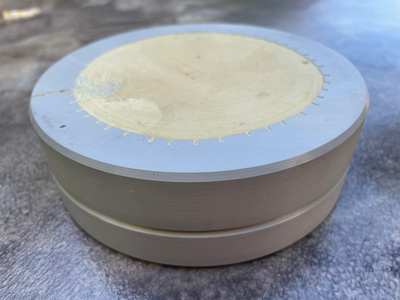 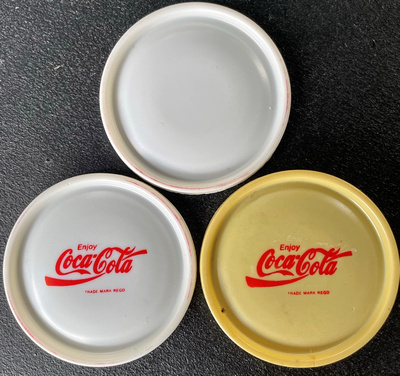 Cola would love this idea to show they were thinking of consumer safety and proactively stopping potential lawsuits.

After a few marketing meetings and advancing up the chain of command with Coke, the idea fizzed out like an opened, day-old can of Fanta. As per usual it came down to money, and the board members decided that although our idea had merit, the costs were too high for them to add another step in their canning process for their drinks!

The First Exerfit Promotions MiniComplete with flashing around the rim.

Licking my wounds, I flew back to Melbourne and decided to have my own mini mold made (say that quickly five times!) and forked out $5000 to a tool and die maker to engineer a single-cavity mold for me to create my own disc. Is that discanny or destiny? The Exerfit mini was born! 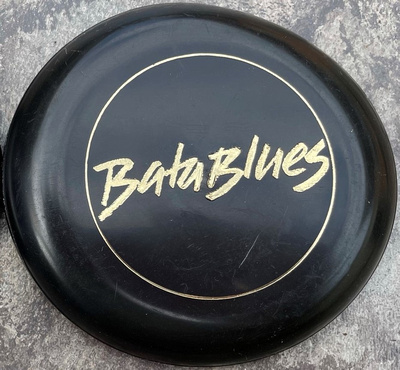 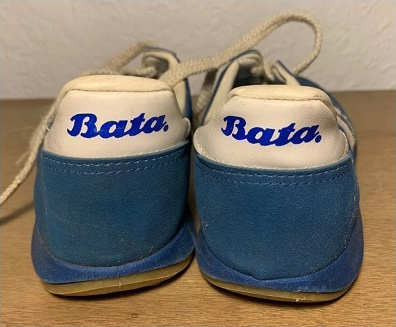 My first big break came when sports shoemaker Bata said they wanted a mini in every shoe box to promote their new walking shoe Bata Blues—so of course the mini had to be a blue one with a gold hot stamp. Naturally, I don’t have a single sample of that disc to show you, dear reader, even though thousands were made. The only one that has survived my many moves and storage fiascos is an example in black—much cherished in my collection of black discs from around the world!

I do have a series of photos of my friends Mario, Vince and Greg coming to the rescue at my house in Melbourne, helping me sort out the warped, unusable blue rejects from the good discs in a production run that went awry—I needed to sort out all the good ones that weekend to be sent away to the hot stampers the following day. As you can see by the photos, they were very helpful! 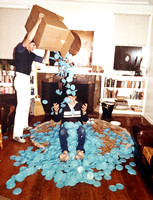 The Bata Blues Mini DumpMario dumps the box on Greg 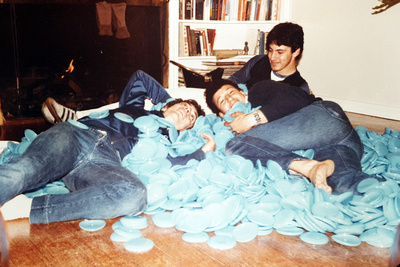 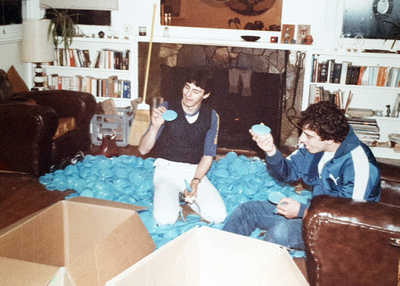 Getting Down to BusinessMario & Vince inspect the product

Other promotional minis sprung out of that first job—Big M flavoured milk, Diet Coke, Timezone amusement centres, and Fox FM stereo radio station giveaways. The 80s was a great time to have a flying disc as a giveaway for promotions, and the mini was a cost-effective method for advertisers to spread their message in a fun way! 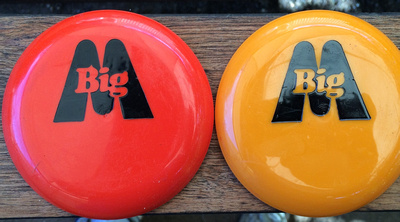 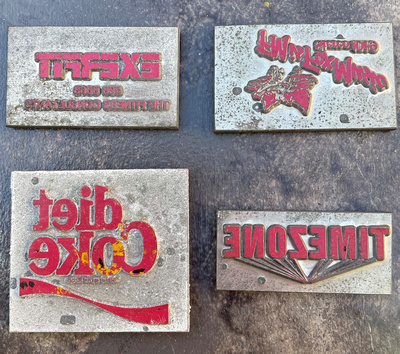 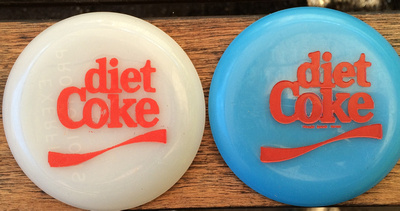 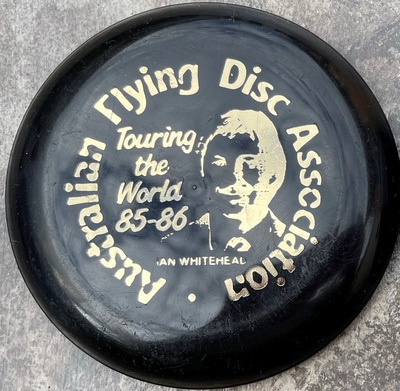 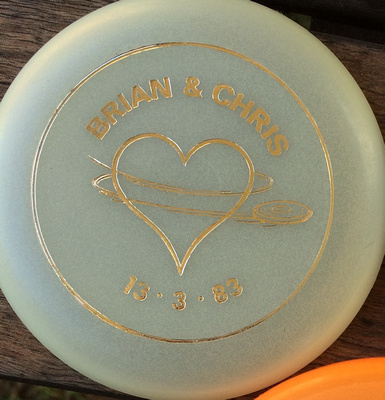 I even made a “calling card” mini for my friend Ian on his touristy trek around the world and mate Brian’s wedding announcement to now ex-wife Chris—maybe a memory best forgotten? 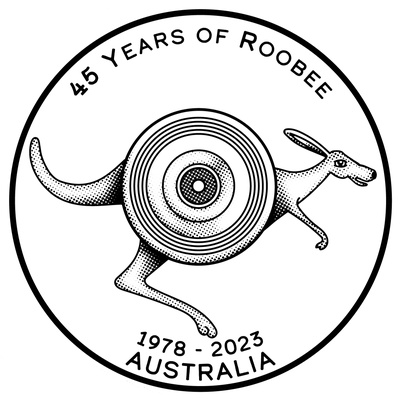 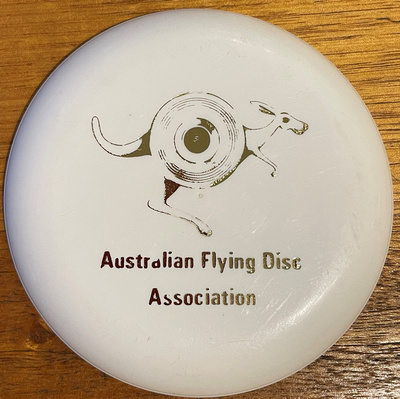 The famous Roobee logo was applied to a run of Exerfit minis for the fledgling Australia Frisbee Association that Brian Vanallen and I started up for Toltoys in the late 70s and was a big hit with collectors. Shortly, Innova will revive that legendary logo! There will be a limited run of 50 discs, a mix of drivers and putters!

When I moved to Adelaide from Canberra, I dissolved my fitness company EXERFIT and started up the marketing company Powersell—so I had the EXERFIT PROMOTIONS removed from the mini mold and just a smooth underside appeared. 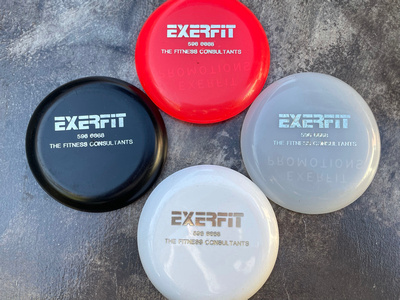 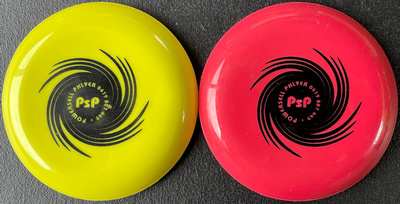 I gave the mold to a plastic injection company in the southern suburbs to tool the removal of the wording and to produce some promotional discs for my new company in red and yellow. I picked them up and put my Powersell logo on the disc, ready to visit local businesses and show them the power of a message on a disc! 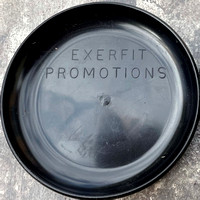 A few weeks later I came back to the plastic injector to ask him to do up some samples in different colours for an interested advertiser, but there was a note on the door from their accountants saying the company had gone broke and to contact them for more info.

I called and found out that all stock and dies had been sold or recycled to pay off their debts and my mold no longer existed. I couldn’t believe that the owner didn’t let me know about all his financial woes the last time we met—how inconsiderate of him!

Now I have just 20 minis with the EXERFIT mark on the underside and a few hundred extra samples with no lettering. I have given a few out to mini aficionados around the world who have contacted me for swaps or purchases. It was the end of a mini era, but I will always have a soft spot for an attractive mini sporting a loopy logo or memorable motto!

Mark(non-registered)
Thanks, Ian for your heartfelt message--Flying discs were a way of life back then and I enjoyed every minute!
As I said in the blog, the mold went missing--hopefully not destroyed--
Maybe someday it will turn up!
Ian whitehead(non-registered)
Fantastic article mark. I got 1000 black exerfit minis as business cards and took them to LA and sweden.what happened to the mold?? Had a mini war in LA with them. Went to sweden for a week in 85 and stayed for 6 years! YOU and BRIAN started discs in Australia. You were the seed from which everything grew. You were my inspiration and also to vince nesci and many others. generosity and passion is what makes
Life worthwile. Thankyou
Mark Powers(non-registered)
Thanks Sis! I'm glad you enjoyed my tale of mini madness!
Melody(non-registered)
Wow great article! I have such a smart brother! I really didn't know all you did in those years. It's really impressive.
No comments posted.
Loading...
Subscribe
RSS
Recent Posts
Mini Mania—mini discs keep good company! K-9 N-Counters Frisbees Unleash Neuroresponses: The Science of Collecting From Great Heights 'Twas the Night Before Rose Bowl Kaposia Community Makes a Meaningful Difference for the Paul McBeth Foundation Learning to Throw The Complete Spin... A YEAR IN REVIEW The Wham-O Trademark Band The Perfect Putt!
Keywords
Disc Golf Collecting Distance Ultimate Frisbie's Pies DGA Midnight Flyer Minis Promotional Disc Dog
Archive
January February March April May June July August September October November December
Photo copyrights belong to their respective contributors, disc design copyrights belong to their designers
User Agreement
Cancel
Continue