None of us started with disc in hand. No, we started with everything but. We started when someone first handed us an object, like a ball, but not necessarily, and we threw it. A Matchbox toy, a piece of Lego, a Lincoln log hurled through the air only to be told not to. Told over and over again. No! Then redirected. Childhood lessons learned in the living room, and then the backyard or the streets in the neighborhoods of our youth. But none of us first learned to throw with flat plastic. Instead, we learned everything but, in a pre-internet era when our moms said, “Get out of house and I don’t want to see you again until dinner.”

Let’s not kid ourselves—we don’t remember that first throw. We were two. But we remember many ensuing ones. The throws, the shots, the passes completed to win a game of touch. The shots made at the imaginary buzzer. The perfect pitch to strike out the side. If you’re like me, you grew up in a huddle, or inventing a game, or at recess trying desperately to be the best. If you’re like me, you spent your childhood playing every game imaginable, none of which involved a disc. You and I learned about flight and aerodynamics the hard way, with toys and equipment that didn’t fly all that well. Still, we learned and later applied it to the flight of plastic. 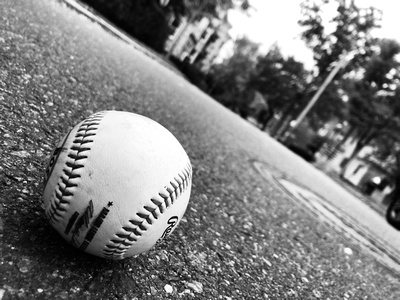 My first love baseball. Hours of throwing and catching. Mastering the pitch. Channeling Tom Seaver and Jerry Koosman. Reading each fly ball as it fell from the sky. Hitting fastballs. Fielding grounders bouncing erratically, occasionally bonking us in the head. We learned to read the bounce—the elusive short-hop. And then, like a first kiss, we learned the curve ball and nothing would ever be the same. Learned that the laces mattered. Learned how to hold each different pitch. We learned that a baseball and a tennis ball have little in common when being pitched, and that the latter can end a fledgling career. Still, we picked our stickball teams and threw as hard as we could, memory of throbbing pain scarred into our minds. Those early lessons with the grip of a baseball, a harbinger of learning different grips on a disc. A palm ball, splitter and two-finger fastball, a bit like the push pass, inside out and flick, each sending its projectile in a different direction and speed off the hand. Ball and then lid, finger position mattering more than people know.

On suburban streets we played stickball, 500, hit the bat. Boys and girls playing together before puberty divided us. Piling out onto the street in front of the house, hard ball and bat in hand, we kept a collective eye out.

“Car,” we’d yell, tempting fate. A younger brother lost to high-velocity sheet metal might be hard to excuse, but still.

“I don’t like you playing out there when cars are coming by,” my mom would say. But by then, we’d outgrown the tiny patch of lawn she called our front yard.

“We’ll be careful,” we’d say to the sound of cars whizzing by. I always found it a bit of a thrill, to field that last hit in the face of oncoming traffic. To hit one last fly ball that resulted in a near miss.

“Steve!?!” John would shout. “What are you doing?” I can still feel the sound of a ball hitting a roof or hood—the thud of our delinquency worn like a badge. 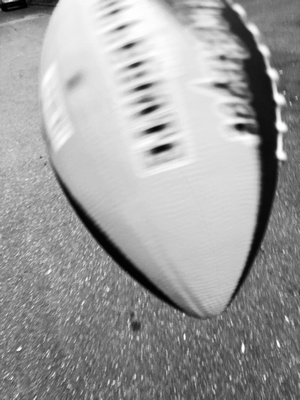 These hits and throws the beginning of learning about the flight patterns. Like Fran Tarkington and Joe Namath’s spirals to their streaking receivers, we began our careers not as handlers, but as quarterbacks, pitchers, and outside shooters in an everlasting game of boyhood, starring our brothers and friends, all vying for something intangible. The bliss of the completed pass. The feel of that perfect pitch. The backward rotation and magical sound of a made outside shot passing through a few remaining strands of a net hanging from the rim. When shooting, throwing, pitching we didn’t aim the ball, we let it fly, like throwing to a cutting receiver. Find the zone. Let it rip.

“Why do you get to call all the plays?” John would ask. My start as a handler tied to those dynamics. I like to see the play develop in front of me, read the field, throw to space.

“You two crisscross, and Jim you go long,” I whisper. “GO LONG!” words we all lived for.

Go deep! The bomb!!! Every kid’s dream to complete them. To hurl the perfect pass up and over the defenders and into the outstretched hands of that best friend. Maybe an older brother first taught us how to hold a football, fingers on the laces, the rotation and spiral predating our experiences with the spin of the disc. Years later, we’d learn the power grip on a football, hand and fingers back one position on the laces, the ball seemingly explodes downfield. It would be twenty years before that same power grip nuance would forever change my backhand, extending a pull another ten yards, disc able to hang up on a loft while the team sprinted into defensive position. There are dozens of ways to grip and throw these toys, that special rotation and spin that makes each flying object a wonder in the hands of the right person.

“Did you see that?” a cry when Patrick Mahomes unleashes a perfect dart while being layed- out. “On a string!” He and others innovating the position.

Tennis taught us what topspin does for trajectory and arc, the game revolutionized when rackets became whisper light, and the ball took on a gravitational mind of its own. McEnroe, Sampras, Williams, Federer, playing a game we hardly recognized. Pace. Spin. Arc. This new forehand a close match to ultimate’s own. Wrong foot forward. A counter intuitive flick for power. 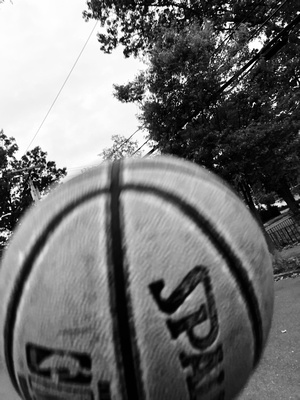 Baseball, football, basketball and much later soccer, my 10,000 hours learned and relearned across myriad sports, my superpower not deft skill at any one, but passion for all. Attention deficit keeping me from overdoing any one of them, from burning out. A time before year-round training. Before weights rooms and personal trainers. Before singular focus. You could play two sports in a season if you were good enough, three in a year was de-rigueur. By high school, it would be soccer, basketball and baseball, later even lacrosse. To our surprise, a soccer ball’s flight as malleable as a disc’s when chipped off the foot of a practiced player. Messi, Rapinoe, Pele. Bend It Like Beckham, Hollywood’s testament to these legendary aerodynamics.

We learned the hard way, my final stop trying the master the knuckleball senior year of high school, about the time you could have found a Master Frisbee in my closet, but before I discovered any love of throwing it. No, the knuckle ball would be my first stop at defying physics, fingernails dug neatly into the laces, a push as the arm completes its rotation, my eyes fixed on the possibility of perfect release and signature lack of spin. Laces and ball arrested mid-flight. Poetry in stop motion and Tim Wakefield’s hall-pass into The Show.

The one time I threw it in a game met with indignation and disgust.

“Throw that again and…,” my coach screamed from the dugout, not needing to finish the sentence.

Still, the allure of releasing a perfectly still pitch lives in me, part of me, like perfectly thrown passes arcing out over sideline spectators to streaking receivers. Overhand wrist flip, thumber, wheel, blade all cousins of these aerodynamic wonders. Ultimate the game that looks easy until you’re out there throwing and chasing soaring plastic. A game that involves threading needles while running intervals, making blocks after six games at pace, and catching floating discs in the back of the end zone when the lactic acid in your legs has taken over. Looks easy to throw and catch that thing. But isn’t. Try hitting a foul shot when your heart’s beating at V̇O2 max. 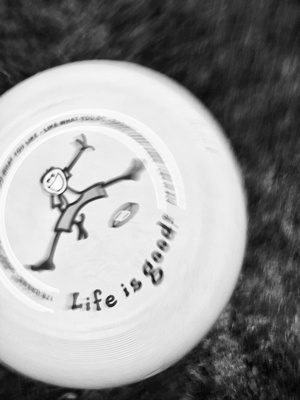 I love watching great athletes first try at reading a disc as it fails spectacularly to mimic a ball in flight. Hangs. Hovers. Pops. Slices. Bounces. Stalls. The disc does more in a single throw than a ball will do in a lifetime, and therein lies the magic, our sport’s raison d'être.

My friends Nick and Chris lured me in, taught me how to throw.

“You suck,” Chris would say. “But you can run and catch.” That from a man born to throw, long. Nick had more patience, taught me the two-finger, our rite of passage into the game of ultimate.

“A flick, not a throw,” he directed me as early attempts drifted off like dying quails. Weeks pass until a day when it all clicks and I find myself lost in the attempted mastery. The perfect flick equal to releasing a knuckler, thrower and receiver both marveling at the gravity-defying characteristics. I would spend the next twenty-five years perfecting throws and ignoring pleas to get down field.

“Moons, go long!” they’d yell, to little avail. My training and place on the field predetermined by years of quarterbacking, of calling plays, of throwing lefty curves to anyone who would catch them. No, I would fail to heed this advice, fail to go long and instead revel in the joy of throwing plastic to better athletes, the memory of them running and catching my hucks thrilling the boy that never quite grew up.

Vanessa Chambers(non-registered)
And old-timers like me who grew up before Title Nine and in a family with zero athletic interests. Fell in love with throwing discs suddenly one day in 1978. No idea why that happened. Still can't throw a ball ... but still love throwing discs!
Phil Kennedy(non-registered)
And then there are those—a scant handful left—whom you might call forerunners, old-timers, or (at the time) oddballs, who discovered throwing discs in our early prepubescence before dabbling in more traditional throwing sports, like baseball and football...and have continued addictively tossing discs ever since. People like Dan "Stork" Roddick who at age 6 around 1954 tossed a Pipco Flyin Saucer; then myself, "Lightnin'" Lyle Jensen, Bob "Flash" Kingsley, and John Kirkland who began flinging flyable plastic soon after Wham-O released its Pluto Platter in early 1957. (My unbagged Platter came with no flying instructions so my first attempts at flight were underhand bowling-style throws!) I don't recall throwing any Lincoln Logs and Legos came along much later (I did have a set of American Bricks, made by a company intriguingly called Elgo!) so I'd say my Platter was my earliest serious tossing teacher.
No comments posted.
Loading...
Subscribe
RSS
Recent Posts
Mini Mania—mini discs keep good company! K-9 N-Counters Frisbees Unleash Neuroresponses: The Science of Collecting From Great Heights 'Twas the Night Before Rose Bowl Kaposia Community Makes a Meaningful Difference for the Paul McBeth Foundation Learning to Throw The Complete Spin... A YEAR IN REVIEW The Wham-O Trademark Band The Perfect Putt!
Keywords
Disc Golf Collecting Distance Ultimate Frisbie's Pies DGA Midnight Flyer Minis Promotional Disc Dog
Archive
January February March April May June July August September October November December
Photo copyrights belong to their respective contributors, disc design copyrights belong to their designers
User Agreement
Cancel
Continue