William Shatner, Blue Origin[photo by The Sun] What is it with the combination of towering objects and the compulsion for an avid Frisbee fanatic to toss a disc off into the great void from those menacing heights? From my own experience, it is the satisfaction of watching that disc soar and glide effortlessly into the distance, free from gravity for a few brief moments and unencumbered from the normal laws of physics—a William Shatner-type moment in a Blue Origin euphoria! 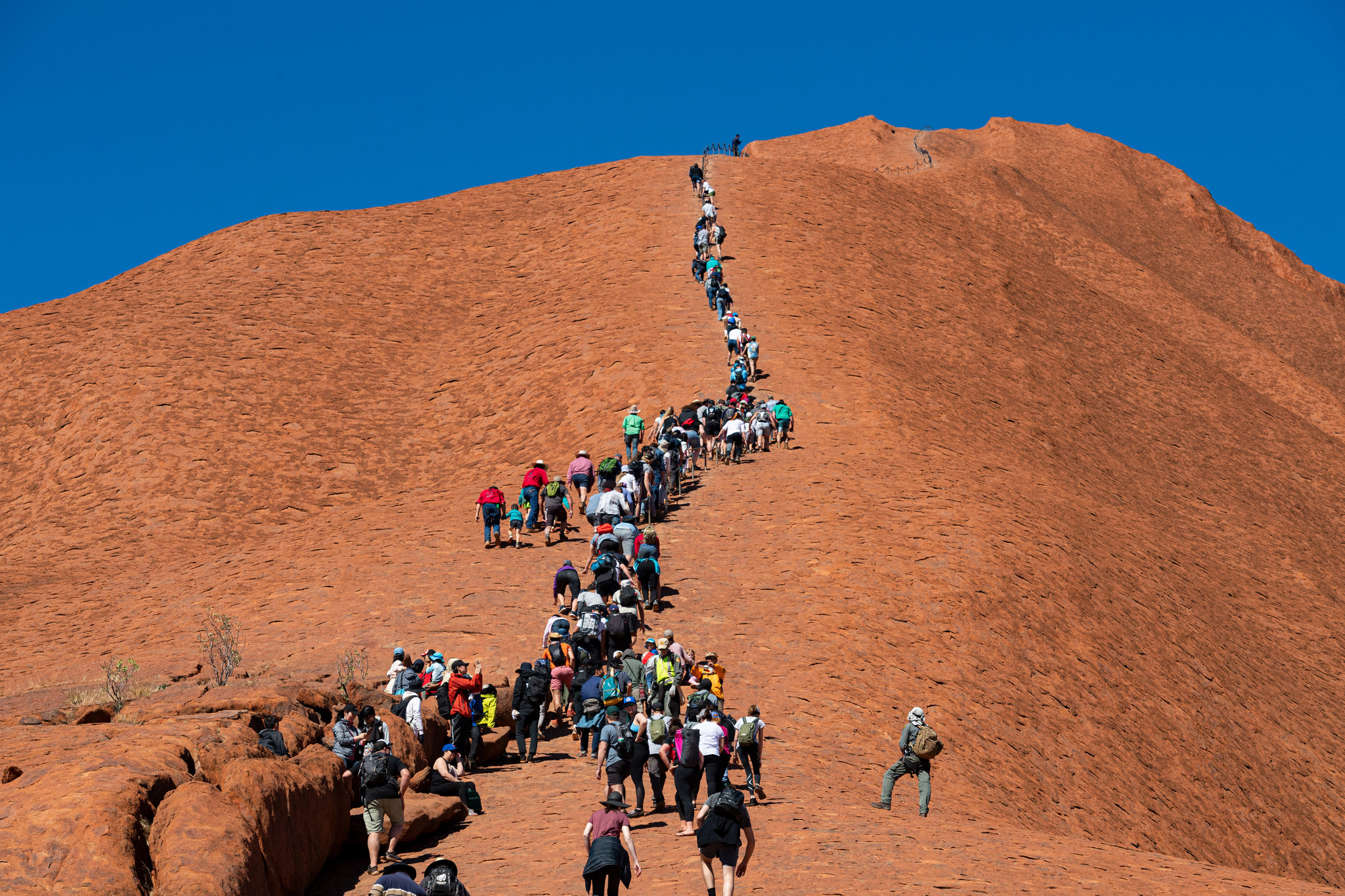 Crowds Ascending UluruOctober 18, 2019—final day climbing was allowed [photo by New York Times] My first flight effort was made in 1977 while on a teacher’s long Christmas break during an ill-fated trip to Australia’s hot, red centre known then as Ayer’s Rock but now appropriately called Uluru, from the local Anangu tongue. Firstly, apologies should be made to those ancient people who have lived in that area for over 30,000 years and as caretakers of that land politely requested Western tourists not to climb the sacred rock for decades, and finally, in October 2019, outlawed further climbing.

But it was the 70s; I was a young, naïve high school teacher that had immigrated to Australia from the US and was teaching Phys. Ed. and Music in an all-boys technical college in Melbourne and knew nothing of the background and historical significance of the area. I was determined to climb the monolith and throw a disc from the top of it, and so, with a like-minded group of four other teachers, set off eagerly to the centre of Australia in my newly-acquired ten-year-old Land Rover—convinced that nothing or no one could stop our discovery and conquest of the fabled Outback! After a few false stops and starts from our Melbourne origin, a few days later we ended up on a fantastic sealed road not far from Alice Springs, the gateway to Australia’s hauntingly beautiful but forbidding Outback, and what we thought was the way to Uluru—only to discover it was the secure road to the highly-guarded U.S. Pine Gap satellite surveillance facility in the middle of the vast expanse of the Northern Territory. The U.S. Marine sentry kindly directed us to a rather non-descript dirt road heading off in the distance and said that was the way we should be going—through the Alice and on to the Rock—and firmly lowered the boom gate as we U-turned out of the carpark! It was only a further 220 kilometres away, but in those days of corrugated dirt roads full of bull-dust and road-trains, it took another day to navigate our way to the fabled Rock.  We pitched our tents in complete darkness in the designated camping area and eagerly anticipated the next morning’s climb. As the sun rose, we stumbled from our tents to the awe-inspiring sight of the looming mass of the Rock, dark purple in the early morning light but set to put on a show of a million shades of red throughout the day!

It was a sober moment in the waiting line to start the climb when viewing three plaques mounted in the red monolith to remind everyone of the deaths of three climbers who, in recent years, had wandered off the chain track that was built in the early 60’s and fallen to their deaths on the slippery sides of the rock. As I stated earlier, the deaths of more tourists throughout the decades spurred the Anangu to close the Rock to climbers in 2019 and focus visitor marketing to activities around the rock rather than on it.

But in my youthful naïvety I had stuffed an orange Toltoys Pro Frisbee in the back of my jeans and eagerly grabbed the chains to haul myself up the steep slope—and when I reached the summit couldn’t wait to launch the disc over the edge. What I didn’t realise at the time was the summit was quite a flat area of the Rock, and when I threw the Frisbee over the side couldn’t really witness the rest of the flight. I could only imagine the glide of the platter out over the burnt soil surrounding Uluru—but it was an exhilarating feeling! 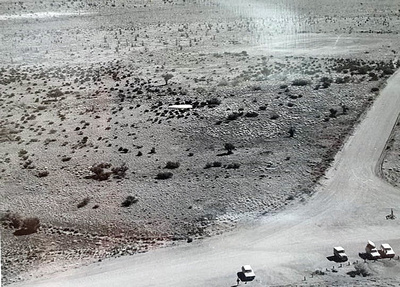 Soaring Over the Edge Over the years since that trip I must confess to many more disc-tossing transgressions, including throwing a mini Frisbee off the first deck of the Eiffel Tower in Paris and hurling a Toltoys World Class 141g 50 mold clone from the rugged cliffs of The Gap in Sydney’s eastern suburbs, a breathtakingly beautiful but notorious suicide site. Both were dangerous efforts to get that fleeting feeling of exhilaration again and watch the disc sail gracefully away into the distance—my hopes and aspiring dreams attached to its flight.

Now I’m wondering dear readers, how many among you have tossed a disc off an impossibly high place and watched in wonder and joy as it floated away?

I have often pondered if there has ever been a launch off the top of Everest—if the climber even has the spare time to throw a Frisbee from that peak nowadays what with the huge corporate numbers lining up to make the run to the summit—I know that astronauts have packed discs with them when launched into space, and thrown weightlessly to each other or themselves in their capsules. When will the first lunar or Martian flights of a disc occur? Will that be the ultimate dream...all puns intended?!

Just a footnote on the karma of that climb on Uluru—when driving back to Melbourne from the red centre in the old Land Rover, one of its pistons broke free and pushed the rod through the engine block—ending the trek in Port Augusta and forcing all five of us travellers to urgently hitchhike the last thousand kilometres back to Melbourne to make the first day of a new school year—but that’s another story!

Unfortunately, I have lost all the photos of that trip in my many moves around this large island, mainly because they were made into slides and not photographs at the time. But none of the memories of that wondrous flight have dimmed!

So please enjoy the photos of a friend (who shall remain nameless!), taken when on a similar pilgrimage to Uluru in the 80s. She threw her Pro off the same area that I did years earlier—probably inspired by my ravings of that earlier sojourn and Zen-like experience!

Marvin P Paul(non-registered)
Nicely done! Makes me want to travel to Oz. My favorite launch spot is Echo summit in the Sierra Nevadas, hope to meet you someday, ( in person ) cheers!
Shane Fankhauser(non-registered)
A great read Mark! Now where did I leave that frisbee of mine…!!??
Mark Powers(non-registered)
Thanks Kevin for the feedback! I guess the near-impossible has been done--although it would've been great to see his video of the disc sailing away towards Nepal!
Kevin Fuller(non-registered)
Here's an article of a reported throw from the top of Everest. No photos though. https://rorymchugh.com/2017/06/01/summit-success-world-record-highest-ever-frisbee-thrown-first-rory-ever-to-reach-the-top-of-the-world/
Flying Disc Museum
Thanks for the story Mark. I too have succumbed to the magic of throwing a disc from a very high place. In 1982, a group of us were heading up to the White Mountains, and there is a windy, steep road that goes around the Salt River Canyon. I happened to have a handful of golf discs aa we travelled, it struck us it would be fun to toss a few off the side of the road into the canyon. We watched for traffic, then ventured into the road so I could use my turn-around distance throw. It was amazing to watch the disc soar into the canyon and when it finally ran out of spin, it fluttered into the abyss. Looking at it now, it was stupid as I'm sure those discs are still at the bottom of that canyon waiting for mother nature to break it all down. Oh, to be young and stupid again :-)
No comments posted.
Loading...
Subscribe
RSS
Recent Posts
Mini Mania—mini discs keep good company! K-9 N-Counters Frisbees Unleash Neuroresponses: The Science of Collecting From Great Heights 'Twas the Night Before Rose Bowl Kaposia Community Makes a Meaningful Difference for the Paul McBeth Foundation Learning to Throw The Complete Spin... A YEAR IN REVIEW The Wham-O Trademark Band The Perfect Putt!
Keywords
Disc Golf Collecting Distance Ultimate Frisbie's Pies DGA Midnight Flyer Minis Promotional Disc Dog
Archive
January February March April May June July August September October November December
Photo copyrights belong to their respective contributors, disc design copyrights belong to their designers
User Agreement
Cancel
Continue