I’ve had dogs as close companions all my life—sure, I’ve had cats and fish and birds as well to share rooms and toys and beds with—but they all sensed that I’m primarily a dog-lover and they came to realise their lower place on the pet totem pole. Whenever I came into the room they would wait patiently for me to praise the diva dog first and then receive the crumbs of my remaining affection! 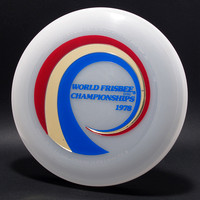 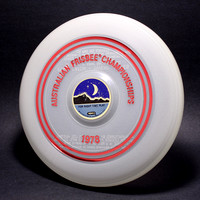 When I won the first Aussie Frisbee championship in 1978 and the main prize was a trip to the Rose Bowl in Pasadena, California—allowing another dog into my life was furthest from my mind until I encountered Alex and Ashley!

I had watched the 1977 WFC tournament video hosted by Dan Roddick and was looking forward to participating in all the Frisbee events, but I was not ready for the Canine Catch and Fetch competition that was part of the tourney. When I saw the one-and-only Ashley Whippet in action with Alex Stein throwing—Ashley making amazingly impossible catches and the crowd going wild for his every effort—I was blown away and knew instantly I had to get a whippet when I got back to Australia and train it to catch discs! 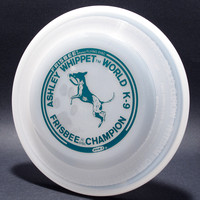 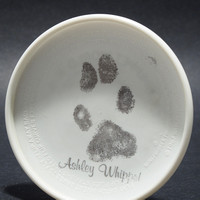 During the tournament on that Sunday, I went up to Alex to pick his brains about training a dog to catch a Frisbee, and he gave me a number of excellent ideas and pointers to follow to make sure the dog would love catching a disc. The most important point he told me was: “The dog has to enjoy the interaction with the disc and have fun—he can’t think that catching a Frisbee is a job or a chore!”

A month after the competition and back in Oz, I eagerly sought out a whippet breeder in the southern suburbs of Melbourne and visited her kennels in the hope of finding a suitable dog. She was the premier breeder of whippets in Australia and had over 200 dogs in various stages of growth and cross-breeding in her extensive sheds filled with kennels—she happened to be the most expensive breeder in Australia as well, with a well-pedigreed whippet going for over $500—and this was in 1978!

I told her I couldn’t afford a pedigreed dog and asked her if she had a plain, non-pedigreed dog I could buy from her. She pointed out a little all-white female whippet that she said she would sell to me for $100, because as a pure colour the dog was of no use to her as a breeder. She explained that premium show-qualified whippets had to be a “brindle” style—white with black or brown mottled spots or stripes and not a solid colour—so I quickly agreed and the puppy came home with me! 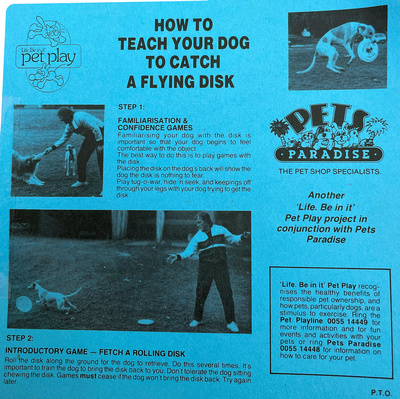 How to Teach Your DogFamiliarisation, Rollers 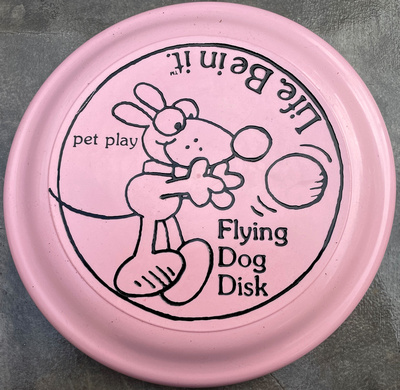 Life. Be in it.Flying Dog Disc

I named her Crystal because she had beautiful, silky, snow-white fur and was so delicate in her mannerisms—very much a princess! I spent endless hours training her with a disc—rolling the disc on the ground for her to chase; playing tug-of-war with her and the disc; putting dog food on the rim of the disc to make it more desirable to fetch—all the tips and tricks that Alex had given me and had used on Ashley to create his wonder disc dog! But I hadn’t counted on one thing that Alex didn’t share with me—beware an overly intelligent dog!

Crystal loved playing with me and the Frisbee—and our interactions were a lot of fun—but she quickly learned to wait for the Frisbee to come down to her. She had discovered she didn’t need to jump up to catch the Frisbee. Why jump for the disc when 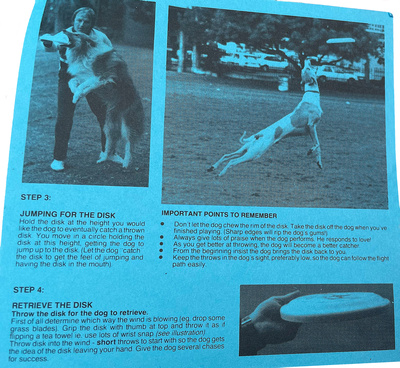 How to Teach Your DogJumping, Retrieving

you know the disc is going to come down to your mouth and you just have to grab it at your level! I was disappointed with my training with Crystal and wondered what to do to change these circumstances.

I decided to get Crystal sired and with her pups see if one of them would be more inclined to enjoy catching while suspended in air. Back to the southern suburbs breeder I went to ask her to mate Crystal with one of her champion brindle whippets—she was happy to oblige and soon I was the proud owner of six brindle whippet puppies stumbling and bumbling around the backyard with half-opened eyes and wanting a feed from mom every few minutes!

I quickly sold off four of the pups and kept two, but with a male and a female and Crystal still had a full house of whippets! The female I named Zees and the male was named Gitis—appropriate names for a Frisbee-mad household! Over the next few months as the puppies grew, I came to realize that Zees was very much like her mother and would not jump to catch the Frisbee—she would intelligently wait for the disc to come down to her level and then run gleefully away from me, wanting to play “keepings-off” and ignoring my pleas to bring the disc back! 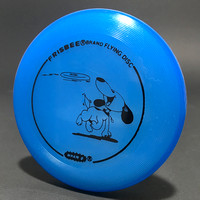 ZeesLet it come to you 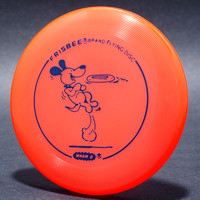 GitisGo up and get it!

On the other hand, Gitis had learned to jump for the disc and realized very early on that if he returned the disc to me straight away, he could go for another jump and another—and the more discs he returned, the more he could continue jumping. He couldn’t get enough of this throw and catch game!  So my attention turned primarily to his training and development, and ultimately his promotion as the Frisbee wonder dog that I was hoping for!

I began to realise that as I got more notoriety and fame as Australia’s first Frisbee champion, Gitis was becoming renowned as my constant canine companion. I would, as the co-president of the fledgling Australia Frisbee Association, call up media outlets, especially TV stations, to promote Frisbee sports. The PR department of the station would invariably ask if I had a Frisbee dog and could I bring it along for whatever show they wanted me to appear on. Gitis was becoming more popular than me!

We were invited to appear on a popular variety show that aired on a Saturday morning: Hey, Hey, It’s Saturday—soon to be a massive cult hit and shown on Saturday night in a prime-time slot. Before the show started, the host Daryl Somers asked if Gitis could catch a disc on the concrete floor of the studio, and I replied that he would find it difficult to land on such a hard surface. So Daryl ordered the crew to find a carpet for Gitis to jump on and subsequently, scouring the channel 9 studio warehouse, they came up with a large roll of Astroturf and rolled it out for our segment. Gitis performed admirably in the tight confines of the space and on the unfamiliar surface! 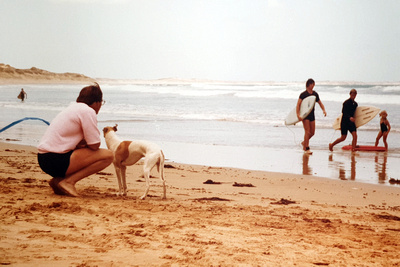 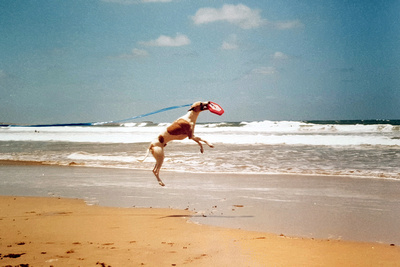 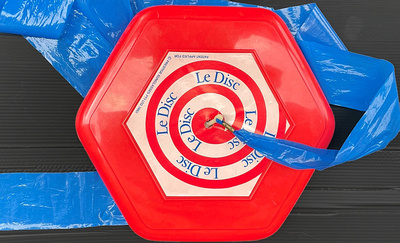 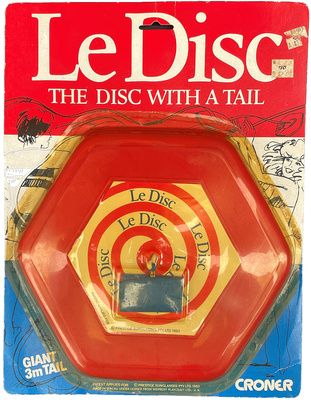 This fame culminated during the years 1980-81 where Gitis was featured in a commercial for Le Tan suntan cream with a shoot on a beach outside of Geelong, promoting their new Le Disc—a strange hexagonal disc with a long, plastic tail attached to the centre of the disc. Gitis made it look easy as he soared high for the disc—in his "heyday" he could jump over 2 metres for the Frisbee (7 feet for those of you in the U.S.!) 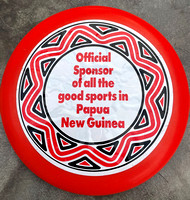 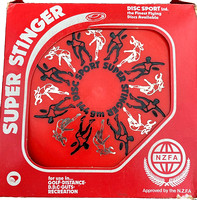 During both of these matches the crowd became restless because the action had ground to a halt or the score was very lopsided in favour of the Aussies, and in both instances, they started chanting “Bring back the dog! Bring back the dog!”—a clear indication that even our freestyle, Ultimate and MTA demos were no match for the excitement that Gitis provided with his boundless energy in chasing down a disc! 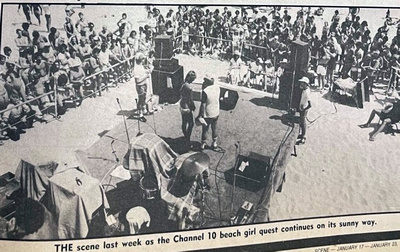 The funniest incident promoting discs with Gitis occurred on the TV channel 10 Beach Girl Quest—where one hot summer we visited Melbourne’s many broad, white-sand beaches in a double-decker bus, complete with stage, live bands, PA system and of course giveaways to the crowds, including Toltoys Pro Frisbees.

After a freestyle demo and tossing the giveaway Pros to the crowd, I would introduce Gitis and bring him out of the bus to a roped-off area of the beach and throw the Frisbee for him to show off his fantastic skills. On this particular day it had been very hot, and the show had been postponed a number of times that morning due to the heat—so when I finally introduced Gitis and brought him out of the bus, he promptly went to the roped-off area and squatted on the sand for a huge pent-up poo, to the delight of the crowd—and then because the sand was so hot on his paws, scurried under the stage for relief from the heat—the crowd applauding his good sense to seek some shade!

Fervent coaxing with his favourite Frisbee could not bring him out from under the stage—we told the crowd to come back later in the day when it had cooled down—and they dispersed, laughing at Gitis’ cheekiness! That was the only time I ever saw Gitis refuse to catch a disc! 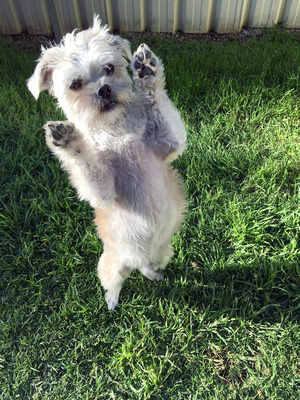 After Gitis passed away I spent years moving around Australia in pursuit of other jobs and passions, and having a dog was not possible during those moves. Now having settled in Adelaide, capital of South Australia with a big country town feel to it, I have felt secure and centred enough to acquire another dog, a small Maltese-cross we named Shnooki.

As a puppy, he would seek out mini Frisbees to play with and bring toys, balls and minis back to me as a catch and fetch game, and simply loved doing it—so when he got older I tried firstly to get him to chase rollers that I would throw, and then foam discs that would float in the breeze, easy enough for him to jump and catch.

I never really had to train him to love catching a Frisbee—he just innately knew how to chase down and catch a disc—and he was really good at it!

Unfortunately, over the last two years we have nicknamed him our “$10,000 Dog” because, in my quest to find another Frisbee dog he has ruptured both CCLs in his knees by enthusiastic leaps for the disc and has had extensive surgery on both legs to fix these issues—and I have paid for the local vet's nice holidays!

The vet has told me to confine his play to tug-of-war type games and long walks in the park—no running and leaping for a Frisbee! I do have a disc golf pole hole for putting-practice in my backyard, so now when I putt, and invariably miss (!), Shnooki will follow the disc and bring it back to me—he still loves to fetch a Frisbee! I’ve had to buy many different putters due to his sharp little teeth chomping into the plastic.

So, dear reader, hopefully you have been lucky enough to have had a canine companion in your life that has been keen to interact with you and a Frisbee—there is no greater joy than discovering that your great love of discs has been transferred to that other love of your life: your dog—and that love will last until the next throw!