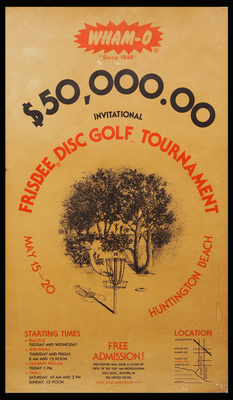 Even though the DC metro area was hit with 18” of snow during the winter of early 1979, I was practicing several hours a day to prepare for the coming North American Series (NAS) and the World Frisbee Championships (WFC) in the Rose Bowl. At age 16, I had placed 22nd overall at the 1978 WFC and now I had set an audacious goal for myself to try to win the overall title in 1979. As if my determination wasn’t already high enough, it kicked up another level when PDGA and Wham-O announced they would have a $50,000 disc golf tournament in May in Huntington Beach. This was huge!

I knew I had to go, but missing nearly a week of high school was going to be difficult to swing. And I would have to come up with money for plane ticket and hotels. I checked the NAS schedule in Frisbee World and couldn’t resist traveling to the San Francisco tournament the weekend before Huntington Beach. After all, if I have to fly cross-country for the $50,000 and miss four days of school, I might as well miss six days and get two tournaments, right?

In San Francisco, I met another player who was heading back to LA and agreed to let me ride in the camper on the back of his pickup truck. This was during a national gas crisis with rationing but he said he knew how to make it work. 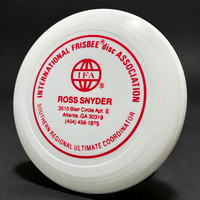 At Huntington Beach, I met my mentor from Atlanta, Ross Snyder (PDGA #65), whom I stayed with that week. Playing a practice round to begin studying the course I quickly noticed two things to worry about. First, the course got very windy in the afternoon. Second, many of the holes that look short enough to birdie were “blind” holes hidden behind bushy trees, which made birdies quite elusive. In those days, we scored all holes as par three, so I needed to find holes where I could get my drive close enough to hit the putt. 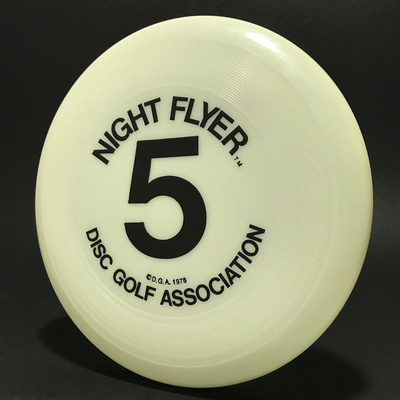 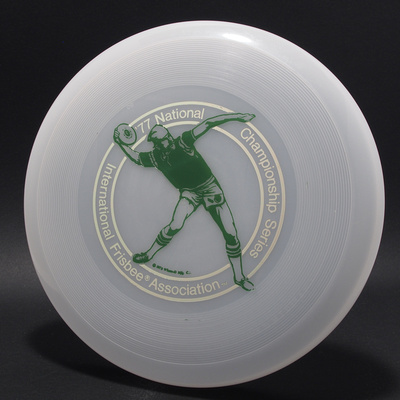 "Steady" Ed Headrick (PDGA #001) was selling stacks of Night Flyers in the snack shop, and some of them were much heavier than any we had seen before. I got two 40 molds, one weighing 138 grams and the other an incredible 150 grams. My dilemma was that while I wasn’t used to them yet I was afraid to practice with them the night before the competition began because they seemed too magnificent to scratch. I continued to use my lighter Night Flyers and an excellent “John Bird” NAS 50 mold for most shots. In retrospect, I would have played better if I had used that heavy 40 mold Night Flyer for every throw—tee shots and putts. Most players, including me, learned only over time about the density advantage of the heavy Night Flyers. 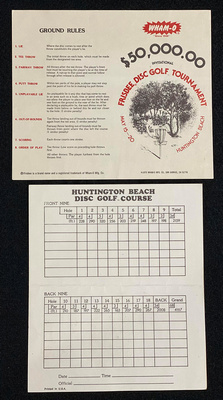 Despite not being as comfortable as I would like on the blind holes, my scores were not bad. Just as I realized only later that I should have emphasized the heavy disc, I only later figured out how I could have gotten more comfortable with the blind holes. Here’s my secret, which is actually plain and simple: Practice the hole with a buddy who goes down the fairway as your spotter. Throw about four drives from the tee pad, with him calling out how each one plays near the hole. Each time take mental notes of your flight path and how your spotter assesses the lie, and then adjust. I always like to look for a landmark tree that I can use mentally for flight control. For example, suppose the hole is hidden behind bushy trees and the flight path curves left, but it’s hard to gauge from the tee pad how far to throw beyond the bushy trees. I will look for an obvious tree I can use as a guidepost where I will want the flight path to begin curving. 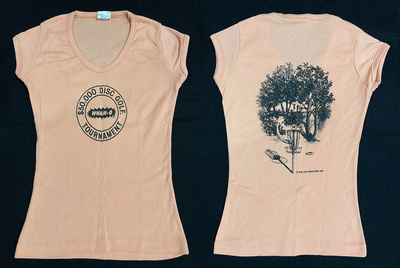 Trade places with your buddy and then he can learn the flight path he’ll need to get near the basket, and watching his discs approach the hole will help you too.

Now, for a minor controversy, let’s move to hole #17 in the third round of four. Hole #17 was downhill, visible, and straight, so I considered this an essential birdie hole even though it wasn’t very short and there was a strong left to right wind from the ocean. When I teed off, my flight was looking nice and I thought it would hit the ground just short of the basket and then skip up to get very close. But just before it hit the ground, G Kirkland (PDGA #1000), (John Kirkland’s, PDGA #100, lovely, smart and talented wife), darted out from under a tree and was unintentionally hit in the back by my disc. She was fine, but the disc careened off to the right. From the top of the hill, we could see my disc was now 35 feet away from the pin. Even worse, my putt would be directly into the wind. Damn! Remember, these were tiny 10-chain baskets and our discs were larger diameter than today’s. Under those conditions, hitting a 35-footer was rather unlikely, so I figured I had probably missed another birdie opportunity. 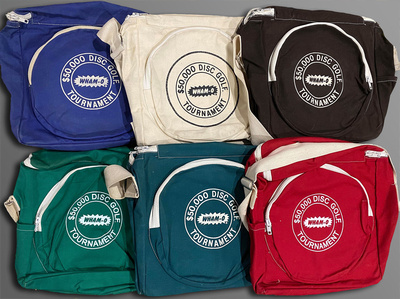 By the time we walked down the hill and I got to my lie, a small group of officials had assembled nearby, including Steady Ed, Stork (PDGA #3), and Tom Boda (PDGA #101). I didn’t know why they were there (the foreword by Stork gives some insight to what they might have been discussing). G came over and apologized, but I told her it was okay, just an accident. Then Tom came over to tell me in his calm voice, “You know, in these situations, you just have to play it where it lies.” I replied, “Yeah, I know.” Now, I realize this is obvious to modern players but bear in mind that our rulebook back then consisted of a single page posted on a sign by hole #1.

When it was my turn to throw, I knew that waiting for the strong gusty wind to die down would be useless. (Remember, when you feel a gust of wind, good or bad, the opposite condition could exist at the end of the flight path. For example, when an experienced distance thrower feels a good wind at his back, he will then count to five before throwing so the disc will enjoy that wind downfield.) Really needing a birdie, I reached in my bag and started to pull out the new 150-gram 40 mold Night Flyer, but the thought flashed: Wouldn’t it be foolish to use a disc I’d never thrown before? I briefly considered using an even heavier 50 mold, but I thought it too risky; with its larger diameter it would barely fit inside the small basket. The voices in my head were indecisive. The basket was on a small hill, slightly elevated from where I stood. With the wind coming at me so strong, I was afraid if I hit the putt perfectly, the disc would just be blown right back out at the moment the chains halted the flight (since the underside of the disc would be exposed to the wind). Finally, the wind told me to use the heavy 40 mold: The density of the disc was more important than its weight. 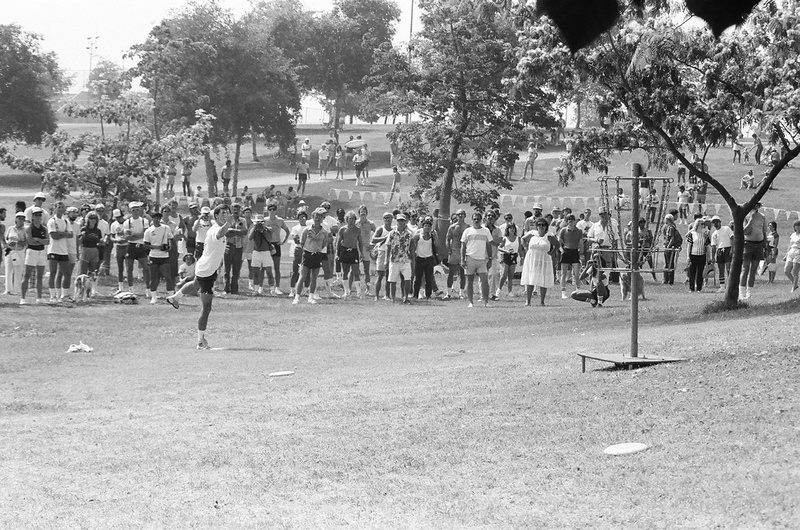 As I lined up the putt, I decided to make a bold adjustment. Instead of a normal flat putt, I would use a slight hyzer putt so that when the disc hit the chains, the weight on the low side of the disc would help pull it down into the basket, hopefully before the wind could blow it back out. I threw it dead center and that’s exactly what happened. Sweet relief: the disc stayed in the basket. 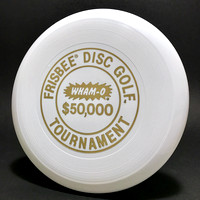 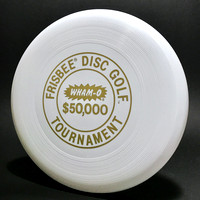 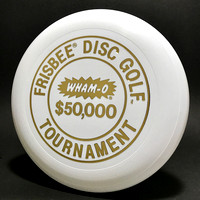 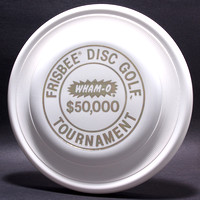 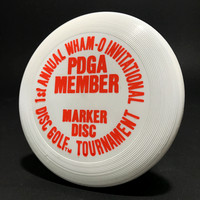 After the tournament, I took the red-eye flight home and Mom took me to school. I walked into my U.S. History class, already in progress. The teacher was the same coach who had cut me from baseball and had been tough about giving me permission to miss school for the week to go to California. Before I could sneak into my seat, he loudly asked: “Well, how’d you do?” I said I tied for tenth place and won $1,050. He looked impressed. “Not bad,” he said.