CHING® is the sense of your achievement…the resonance of your success. It is the moment of echo when triumph is realized & amplified in a fleeting bid to satisfy your passion.

"Was it really that easy?…did I just PRINT on a GOLF DISC with a transfer sheet used for mouse pads? NO. No-No-No; you did not. Because dyes bleed,” and I should’ve known that from my own food & cloth dye testing. I would have one last option to try again with pigments. But first let me backup in time to setup how it came to be…

1992…finally; 10 years in the trades handcrafting 7-digit dollar land & homes in the field while aggravating teachers just trying to do their job in school. I got the college degree, dumped the tassel & gown, and shot straight outta Columbus, Ohio, as fast as possible. I mean, as a recreational Disc Golfer I really enjoyed Blendon Woods and it was sometimes fun staying in the fairways at Hoover but for life in general I didn’t have much love for that Buckeye college town. However, I must credit the curriculum at Ohio State’s Landscape Architecture program back then. They were progressive with CAD computer graphics…a focus on graphics in general for sure, with marker renderings, pen details, charcoal or 5mm pencil drafting, perspectives, shadowing, architectural handwriting, etc. …and the broad based technical material covered in LARCH was really 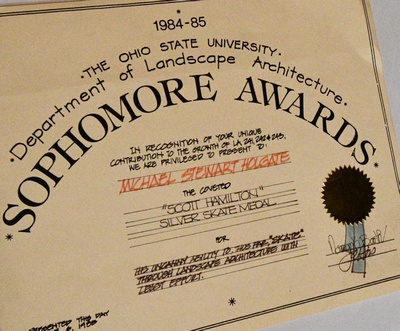 foundational in my consumption of transferable method(s), scale, and knowledge base. I was awarded for my “uncanny ability to thus far skate through with least effort” by professors (pretty sure it was a jab, but I’ll spin it as a compliment).

And with that support I later won the Senior Design Competition for a 10 acre beech-forested site presented to Muirfield Village HOA featuring an animal themed, Educational Disc Golf course. That was an enjoyable, real world, exercise. But I struggled…errr, I should say I just didn’t give attention to…technical details on freeway superelevations or identifying mica vs. schist fragments in geology samples. That stuff exceeded my self-aware allocated RAM levels. Knowing that it existed was enough for me and I’d specialize in the future if necessary, so I experienced a colorful spectrum of alpha-numeric grading…good, bad, ugly…and I got what I needed out of the deal: paper please?…thanks, later.

So I moved south and picked up a Temp-Talent job working as an Inspector at the FDOT (Florida Department of Transportation) Maintenance Dept. in Central Florida. The Orlando area had a fair selection of Disc Golf courses and I filled some free time picking plastic out of scrub thorn and sand spurs at Barnett, Turkey Lake, etc. All the while I was advancing quickly within the Department. 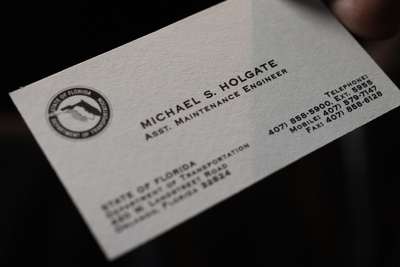 Fast forward a few years; I commanded maintenance operations for all State roadways for Orange County's Orlando jurisdiction, including I-4 and contract supervision within the City of Orlando. My crew(s) were relatively small and loyal because I kept my boots on and gloves ready. Occasionally I also directed a bus load of 'in-mates' for work program labor depending on the project; there was no failure to communicate. 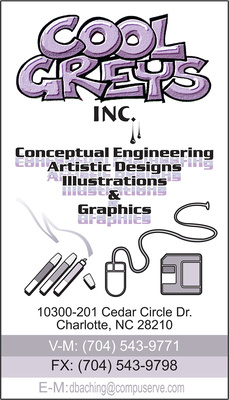 I suppose the point is, with the success and financial stability of a 'real' job, I was able to act on my awareness of the creativity platformed by personal computers; I setup a scanner, printer, monitor, and hard drive with some recordable CD slots for like $5000 back then. Yeah…ouch. The first graphic specific program I picked up was from a friend in the sign business, so I learned the vector program CorelDraw while many others were on a more traditional (although in the long run basically parallel) graphics software path with Adobe’s Illustrator. I would also learn the raster counterpart to CorelDraw called Photo-Paint, compared to Illustrator’s legendary pixel partner Photoshop. I enjoyed the new media opportunities for progressive art now at my disposal, and I incorporated a business JIC my (overly ambitious) talents might (not likely dude) blossom into a full-time demanding graphic career.

I called it Cool Greys Inc, named after the cool grey colored markers I frequently used for shading to add life and character to hand illustrations. I wasn’t trained/employed in a traditional graphics house and I understood my own naivete while still feeling like it was possible to beat the odds…stuff like logo design, wedding invites…all that graphic work that’s automated through Walmart nowadays! …anyway, with a little disposable income I also thought it would be cool to own a heat press and start printing my own t-shirts and hats. 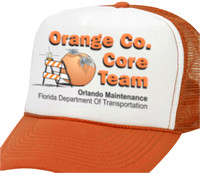 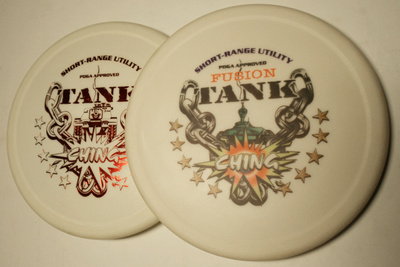 Of course I had no clients or marketing plan but when I made hats for my crew, and later in volume for the whole maintenance field branch, I started to realize there was value in the art but also in the consumable substrate. At this point, sometime later in ‘96 I reckon when I was exploring other substrates like coasters or mousepads, it occurred to me that when I shopped for golf discs I only recalled seeing foil stamped artwork…more often than not, only one stamp/color (single stamp).

I thought about my own consumer experience…why I bought the Piranha instead of the Birdie— just because of how the graphics looked—and wondered if I could print on a plastic golf disc like I could on t-shirts or other proven substrates with my own designs? I got an idea…

By this time vocationally I’d been recruited further up to District Headquarters at DOT’s Deland, Florida, Office in Permits & Drainage Division…Highway Beautification Grants, special projects 'n' stuff. The commute from our apartment in Orlando was not fun at 50 minutes so I knew it would be a short while to decide if my fiancée and I would continue planning a Florida life or consider alternatives…maybe relocate to DOT HQ in Tallahassee someday? …or get closer to family up north and…hey, wait…isn’t Innova branched in the Carolinas? …always wanted to live there!

Charlotte was on our list of possible cities to live in, but I think I may have made a specific drive up to visit Harold Duvall's Carolina Flying Discs shop (aka Innova East) just south of there in Rock Hill, South Carolina; they were reluctant to receive unknown visitors, and blank discs were very sensitive back then. When I visited (unannounced), Harold wasn't there but I was able to convince one of the senior staffers to allow me 5 or 6 blank white golf discs to take home and test after showing them what I was working on.

But then…man I hate that feeling…when there's debilitating obstruction to progress with little room to navigate.

I wasn’t necessarily on a do-or-die mission to print on golf discs. Like most creative endeavors, I was originally driven by curiosity and if it failed I wasn’t about to go looking for another different kind of overpriced specialty printer. I just got lucky with what I had to work with; but then again, you certainly can make your luck. 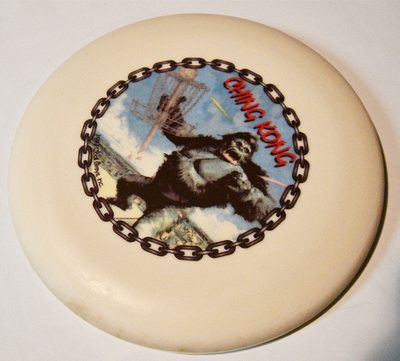 It’s not a stretch to say that from then on graphics and marketing in the Golf Disc industry were changed forever. Applications have continued to evolve with direct print technology and full surface coverage but my process was the 1st to offer stock or custom Full Color digitally produced printing on a golf disc for one-offs or hundreds qty. 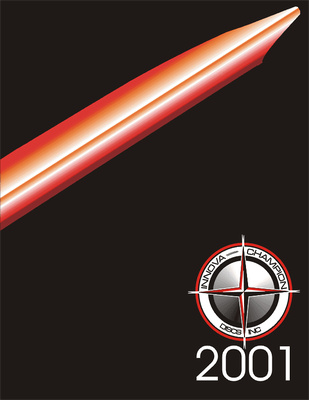 I occasionally freelanced for Innova on a handful of graphic projects, including master catalogs

So it was decided; I left a very promising cushy state government employment ladder to see if there was fortune in frisbees. My fiancée and I selected a southside apt in Charlotte to be closer to the SC border in case the Innova relationship developed, and it did for awhile. I think working directly for Innova may have been an option, but I didn't want to forfeit independence so they allowed me to purchase blanks and I would print and sell them like other wholesalers…drifting farther and farther awkwardly into ‘business’ and away from ‘creativity.’

There may have been confusion among retailers at the time too because I part-timed with Harold packing orders for a little while in his Innova warehouse, and I would answer the phone there… but I'm also the CHING guy.

It was getting diluted and that was bothersome to my willfully inflated ego. I would continue selling directly, but eventually I found it easiest to subcontract filling orders taken by Innova on a per/piece service plan for tournaments/events after the concept was well proven…(pretty much the '97 World's there in Charlotte). 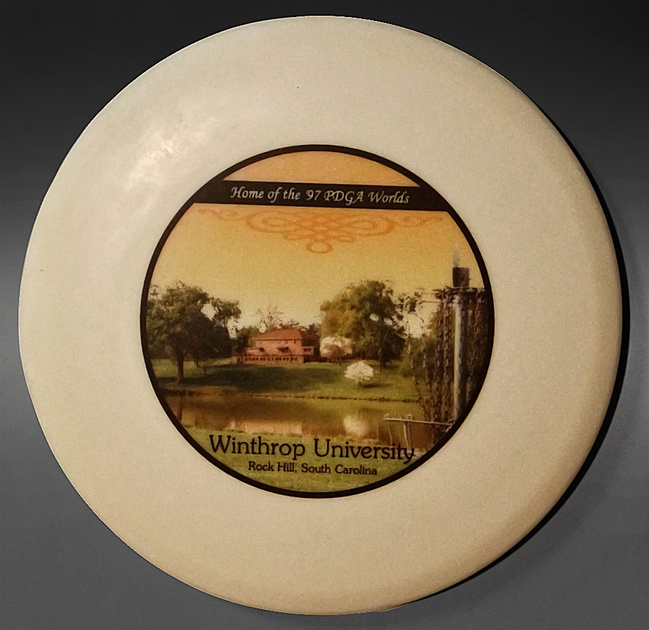 Of course I still heat-pressed t-shirts too, so low quantity custom order packages were an easy sell to someone holding a tournament. By 2001 it was a modest little income but our family was growing and I wanted to pass it on. Ultimately I sold the equipment and knowledge to Innova East. They were able to benefit for a few years more until direct printing transitioned to the dominant and overwhelmingly superior method. 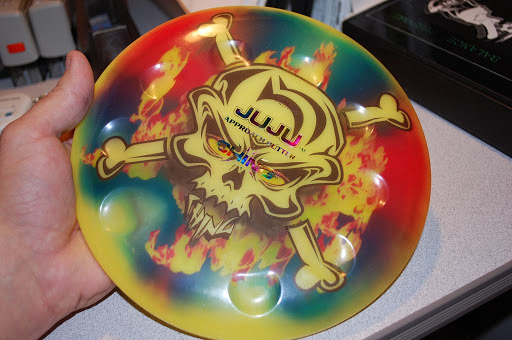 It was during that late '90s/early 2000s period when I changed my corporation name to Holgate Inc instead of Cool Greys. I invented and patented the revolutionary Skill-Shot (portable umbrella design) and licensed it exclusively to Innova. Duvall and I also agreed to work on the first Innova molded CHING golf disc line (The Bomb, Sniper, Stinger, and Tank) in a marketing model not unlike John Houck’s Millennium. It was a good deal for me, but I didn't like the lack of control over the molding/design process and the idea of being unauthentic as the Innova owned mold parts were also rebranded elsewhere. And I also wanted to explore new technology, like our Patented surface contour D.R.A.F.T. concept (Dynamic Rotational Air Flow Transition), that was not associated with another brand because it was my idea to develop. I wanted to make it with my own network, and for awhile we were positioned well in the market.

Jump to the present: by now my recent decade’s efforts (lack thereof) are reflected in the drop from the industry stage. In any case, it’s noteworthy that the CHING brand and tools have been sold and may arise in the near future with some of my support behind the scenes…? Meanwhile, for me, the creative journey continues…that YouTube thingy looks pretty cool…besides, I got an idea…

I got an idea