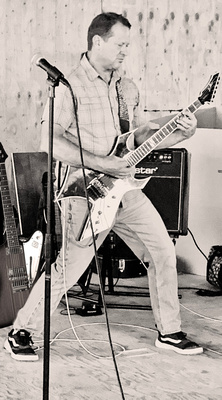 GuitarsRockin' it out at Carneros Studios with a B.C. Rich Warlock NJ Deluxe (Firebird in background)

I remember as a kid having a key chain collection. The one that sticks in my mind was a rabbit’s foot. Not very lucky for the hare! I was a fiend for Wacky Packages and still think it would be cool to have some of that original art. My father and I had a cheap pocket knife collection that never did seem to have a sharp blade in the bunch. To this day, I never make the claim to have a sharp knife, but I always have a serrated blade. I was very proud of my record collection but that is a bygone era that seems to be making a comeback? The only valuable vinyl was the obscure Heavy Metal. Most of that went to eastern Europe when I sold it off. I do have 15 guitars! That counts as a collection, right? Pinnacle piece is a 1964 Gibson Firebird III. But none of these compare to my frisbee collection of over 5000 pieces. 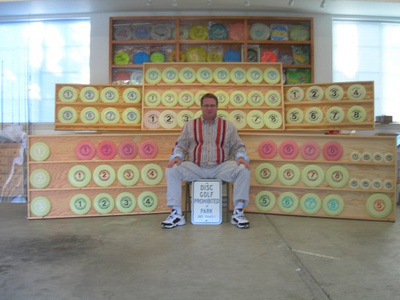 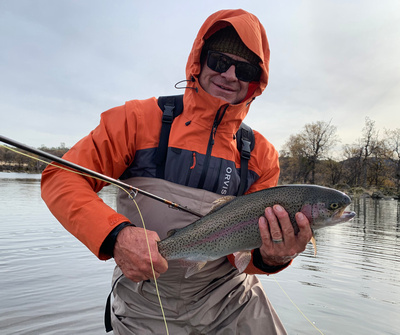 I started playing disc golf in ‘81. It was the summer after I graduated from high school and I loved it! At that first round at Veterans Park in Sylmar, California, I was introduced to Wham-O / DGA Midnight Flyers! These would become a main focus in my collecting. I have played all these years because like most activities I start, I just keep doing them—like skateboarding, snowboarding, wakeboarding and fishing! Had to throw in fishing because I did not want to “board” you to death. 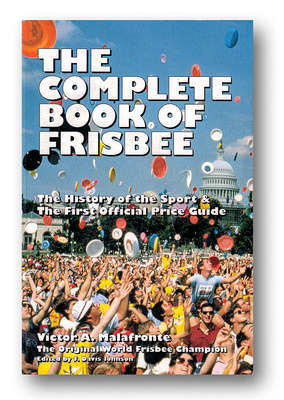 The Complete Book of FrisbeeVictor Malafronte 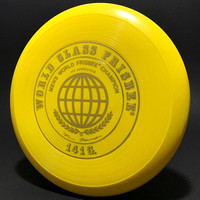 I played my first Disc Golf tournament in ‘91. It was in Sonoma and it was hosted by the UFOS. I had lost a disc during that event and had no backup so after that I had lots of backup discs. Then I started with custom stamped discs—next thing I know, I have a few hundred discs and counting! In 1998, Father Victor Malafronte came out with The Complete Book of Frisbee, not only did it have a price guide but it gave me a focus on what to look for. Until then, I would stop in at places like Discovering the World and ask them to sell me something cool. Brother Dan Mangone and Brother Mark Molnar thought I was crazy. I did not know much about plastic outside of golf discs. I walked away with a Wham-O 50 mold with a scribble signature. Later looking to get my first pie tin I was talking with Dan on the phone, I bought it sight unseen (before you could send a pic via phone) and once again I was making crazy impressions about my obsession with discs. 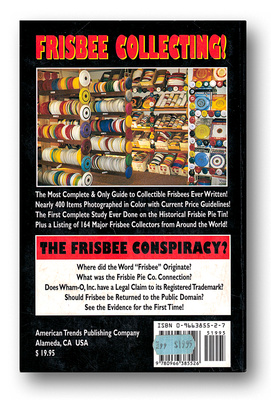 Saint Ralph Williamson, PDGA # 10, was in Victor’s book, and there were photos of Ralph’s museum on the back cover. Later, when I was in the Seattle area, I had to stop by—super cool, tons of stuff and it was all for sale! I believe it was 2006 when I pulled the trigger on Ralph’s collection and went from a collector with 500 discs to 5000. My wife Lisa thought I was a nut but supported me. I was about to get an instant education on the old stuff. It was so cool to go through his plastic and find treasures: Pros, Super Pros, Sailing Satellites, Flying Saucers, Midnight Flyers. He had lots of Wham-O stuff and was really into Pluto Platters. I was on eBay selling off things that I was not sure about (so I could buy other discs). I sold several things to Father Phil Kennedy. 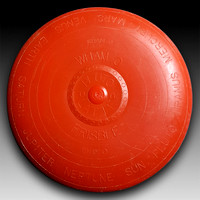 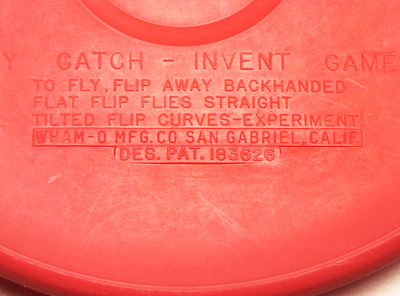 One day I found myself in Manchester, Connecticut, playing Wickham Park when I noticed one of the holes was sponsored by Phil. I was playing with a local that had his number, and I was invited to come over for a chat. I remember Phil’s office; it had a timeline of discs and most were in yellow, very interesting. Turned out Phil was a collector of Pluto Platters. We talked about the different re-toolings. I had several from Ralph’s collection but was missing the “hard-to-find” Plutos. We talked about the Palmeri/Jensen timeline. I remembered that there was not a picture of the double esker in Victor’s book, and when Phil produced one, I had a new collecting purpose. I had been interested in all things flying plastic but this was the moment when the hook was set! Then to drive the point home, Phil comes out with a book he co-wrote with Saint Fred Morrison; Fred made the first plastic flying disc in 1948.

Phil worked several trades that helped me get some of the other hard-to-find Wham-O Pluto Platters. I bought and traded with others like Brother Charlie Burke, Father Lyle Jensen and Father John Kirkland. I even found three American Trends Plutos, two on eBay and one from 8X Master Freestyle Champion, Brother Joe Messner. I went deep down the rabbit hole finding several “hard-to-find discs,” many in the package. Later Lyle pointed out all the different bags and header cards. Lyle has a real eye for nuances in flying discs. His Pistol Putt made a real impression on me and my boys in Toronto a few years ago! 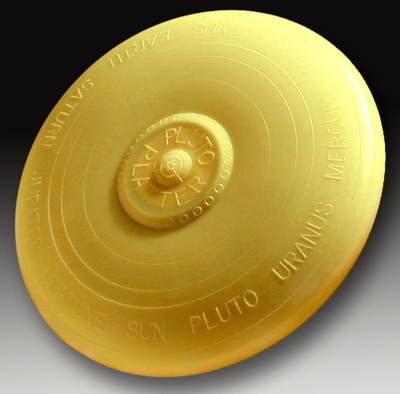 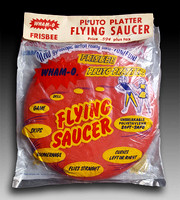 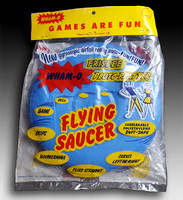 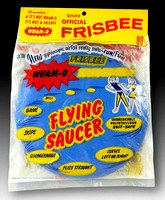 I had Father Donn Blake come to my house with many “hard-to-find” collectables but even better were the stories he shared having run the Jr. Frisbee® Championships for many years, as well as many other promotional events. Early disc golf courses had Around Nine putting stations—thanks to Donn for that idea, Ed would install Around Nine stations as he spread courses around the country.

I had an opportunity to help Farina (Saint Ed Headrick’s wife) sell some classic collectables, from Midnight Flyers to early DGA discs and other things like embroidered outfits, posters and early International Frisbee Association items.

I started the Vintage Cup Disc Golf tournament in ‘95. The last several years I would do a disc display of 150 discs or so, and it was fun to have them out for viewing—it got me to start a website of my collection. You can find it at  www.marvinsflyingdisccollection.com. Many folks contact me and it just keeps the collecting juices flowing! 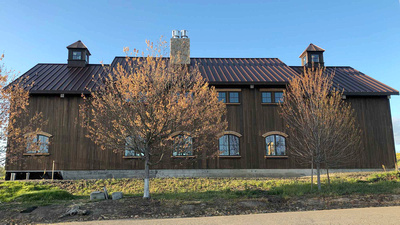 The collection has had many homes, from my garage, to a secret man cave basement, to storage and now at Carneros Studios. I've had visitors travel from near and far, always a good time chatting plastic. Even with all the cool plastic I have, there is always room for upgrades so I keep my eyes open to see what turns up. I will be collecting discs for the rest of my days. I am glad that I have four kids, and now grandchildren that like disc sports—like they had a choice! Love getting out to the course and playing. The other day I was in Berkeley playing with my oldest grandson, just like I did with his dad and his brother and sisters.

For the last three years, my wife Lisa and I have been building a barn that will have a music and art studio, and notably house Marvin’s Flying Disc Collection. Take a moment to check out our website at www.carneros-studios.com. Be sure to register to join our community of Friends and Family so you can stop on by and we can talk plastic.

I think that is a great idea. Let's host in Napa in the fall of 2021 at our new location at Carneros Studios https://www.carneros-studios.com. If you click on the website link & join, you will see upcoming fun events with friends & family. I'll put an event up for us in the fall which is a beautiful time to come to Napa!
Flying Disc Museum
It's a reel pleasure to be hooked up with you, Bro Marvin!
geocraftshop.etsy.com(non-registered)
Amazing!
Billie Sage Ashton(non-registered)
Marvin...great read! As a collector myself, I've checked out your website and was quite impressed! I'm glad I got to meet you at the Frisbee Collector Convention in Naperville, Illinois that Tom Wehrli hosted back in the fall of 2018. The road trip from Minnesota to Illinois was well worth it! I really enjoyed meeting you and some of the early pioneers that played in the WFC's! What a weekend! That weekend as you know, helped organize the 2nd Collector Convention that Stork and I organized at the Hall of Fame Classic at the IDGC in Appling, Georgia in the fall of 2019. I think it's time to organize another Collector Convention since we didn't get one organized in 2020. What do you think?
No comments posted.
Loading...
Subscribe
RSS
Recent Posts
Mini Mania—mini discs keep good company! K-9 N-Counters Frisbees Unleash Neuroresponses: The Science of Collecting From Great Heights 'Twas the Night Before Rose Bowl Kaposia Community Makes a Meaningful Difference for the Paul McBeth Foundation Learning to Throw The Complete Spin... A YEAR IN REVIEW The Wham-O Trademark Band The Perfect Putt!
Keywords
Disc Golf Collecting Distance Ultimate Frisbie's Pies DGA Midnight Flyer Minis Promotional Disc Dog
Archive
January February March April May June July August September October November December
Photo copyrights belong to their respective contributors, disc design copyrights belong to their designers
User Agreement
Cancel
Continue