Maker: Wham-O
Model: 165G
Style:
Mold: 82E
Size: 10.875 inches
Disc Color: Unpigmented
Lettering/Hot Stamp: central states region * st. louis—Copper, Metallic Red—Split band TMB
Label/Sticker:
Date Introduced: 1981
Number Produced:
Period of Manufacture: 1981
Special Notes: Designed by Jay Doty. This design won Disc of the Year (DOTY); the story is available on page 12 of this issue of Frisbee World. This unpigmented version is part of the special run done for Jay for the winning design. The design was reworked slightly for the special run. The tournament year was removed and the right side of the horizontal lines was cleaned up to create a smoother curve.
The Central Regionals were held October 31–November 1, 1981 at Bellefountaine Park in St. Louis. Michigan State Ultimate upheld their number one seeding and won the tournament, besting 15 other teams. MSU's path to victory included a 17-14 win over the St. Louis Panteras Tunas, and a final 15-12 win over Ohio University. Ohio had won the other semi-final game 16-15, beating the Ozark Ulta Mounties. This was MSU's fifth consecutive Central Regional Championships win.
On the women's side, Michigan State, Kalamazoo Ultimate, Carbondale [Ohio), and the Tasmanian Disc Devils faced off. Michigan State beat the Disc Devils in the finals to earn their trip to Nationals in Austin.
Full accounts of the tournament can be found in the January/February 1982 UPA Newsletter, with articles covering the men and women. The tournament director was Joe Aromondo.
Disc from the collection of Steve Goodwin, RIP.
Contributor(s): Kevin Fuller

ADDITIONAL INFORMATION:
This is a typical descriptor for Ultimate Tournament discs. These discs are non-golf discs, primarily Wham-O 165G and Discraft Ultra-Stars. Be sure to follow this example exactly. You can highlight the descriptor above (excluding this Additional Information section) and then copy and paste it to your disc. Pay attention to the way semicolons are used to separate sections of the Lettering/Hot Stamp information. You can add as much information in the Special notes area as you like as well as adding links to people, places or things. 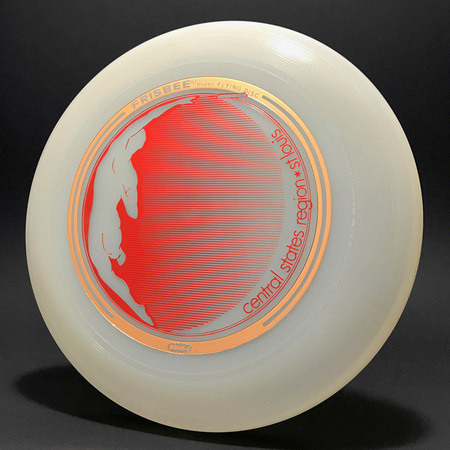