Maker: Discraft
Model: Sky-Styler
Style: 4th (thick ring, tooling)
Mold:
Size: 10.5 inches
Disc Color: Yellow
Lettering/Hot Stamp: Victoria Natl's [Nationals] 1983; Apr. 30, May 1; Coastal Disc Flyers; FPA and PDGA—Red
Label/Sticker:
Date Introduced: 1983
Number Produced:
Period of Manufacture: 1983
Special Notes: In the early '80s Austin was host to a spring Southern Nationals tournament run by Chris Baker, president of the Lone Star Disc Club. These were huge events that drew over 10,000 spectators. In 1983 the cost to rent the Austin facility jumped, and Baker eventually coordinated with Warren Milberger to move the event to Victoria, TX. It became the Victoria Nationals that year. The crowds at the event may have been much smaller compared to Austin, but some top-flight freestyle talent competed. For co-op Darryl Allen, Chip Bell, Allen Elliott, John Houck, Larry Imperiale, Deaton Mitchell, Donnie Rhodes, Chris Ryan, and Bill Wright put names in a hat and drew the co-op teams. Donnie, Darryl, and Chris won.
This event disc was made by the local Victoria club, Coastal Disc Flyers. Although it lists the PDGA and there was a disc golf event at the tournament, it was not PDGA sanctioned. [Tournament details provided by Allen Elliott and Warren Milberger]
Contributor(s): Kevin Fuller

ADDITIONAL INFORMATION:
This is a typical descriptor for Freestyle tournament discs. These discs are non-golf discs, commonly Discraft Sky-Stylers. Be sure to follow this example exactly. You can highlight the descriptor above (excluding this Additional Information section) and then copy and paste it to your disc. Pay attention to the way semicolons are used to separate sections of the Lettering/Hot Stamp information. You can add as much information in the Special notes area as you like as well as adding links to people, places or things.

For all discs in this gallery, the titles should be listed as the Tournament, Year—Maker Model—Disc Color—Hot Stamp Color(s). (For Wham-O discs, it's Maker Mold.) These are separated by an em dash. (Windows is Alt0151).

For all Freestyle tournament entries, use the standard colors described in the FDM Color Specifications.
Apple iPhone 7, f/1.8 @ 3.99 mm, 1/30, ISO 32, No Flash 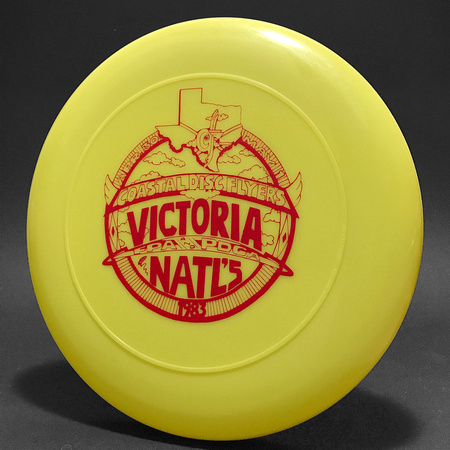