Maker: Wham-O
Model: Fastback
Style: Square Top
Mold: FB2
Size:
Disc Color: White
Lettering/Hot Stamp: Ashley Whippet Lion Country Safari—Black
Label/Sticker:
Date Introduced: 1975
Number Produced: 100 (less then 25 remain)
Period of Manufacture: 1975
Special Notes: [Lion Country Safari existed in Irvine, CA from 1970 to 1984. Alex Stein and Ashley Whippet did some shows there and this Fastback was mede to commemorate the event. It is the first disc to feature a photo of Ashley and is very rare. Although 100 were made, only about 25 were sold and the remainder were used by Ashley. The printing is a silkscreen, not a hot stamp. Info provided by Tom Wehrli.] Since Square Top Fastbacks were only made in 1975, most likely the demonstration took place in 1975 or 1976. Large Wham-O Frisbee tooling, typical of a square top is present on the bottom. Disc courtesy of Charlie Burke.
Contributor(s): Tom McManus
Apple iPhone 8, f/1.8 @ 3.99 mm, 1/60, ISO 25, No Flash 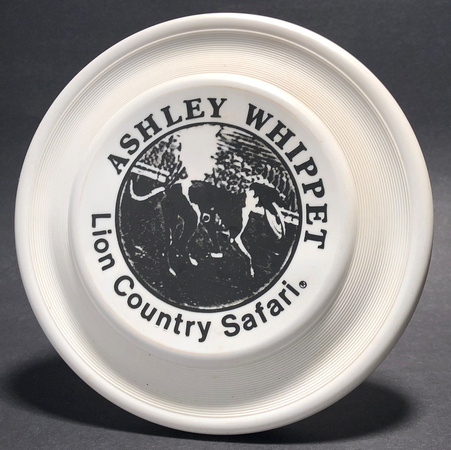