Maker: Towa
Model: Mini Set
Style:
Mold: 1 (also 2, 3)
Size: 3.9 inches
Disc Color: Glow
Lettering/Hot Stamp: Night Lighter 15G (1–8) © Towa 1981; Japan Frisbee®® Disc Association Approved—Black—Mini split band TMB
Label/Sticker:
Date Introduced: 1981
Number Produced:
Period of Manufacture: 1981
Special Notes: The set came in a special display case. The covers of the cases were fragile, and as a result, there are fewer of those in mint condition than the sets of discs. Here is an example of the set in perfect condition. The discs are similar to Midnight Flyer Marker Disc minis, and often treated as a one of the Midnight Flyer minis sets, but these have no Midnight Flyer branding, nor were they produced by the DGA.
Contributor(s): Kevin Fuller, Mike Hughes
OLYMPUS IMAGING CORP. E-M5, f/9 @ 20 mm, 0.8s, ISO 200, No Flash 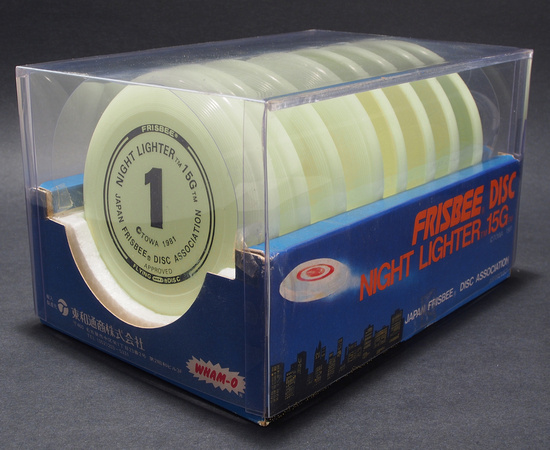