Maker: DGA
Style: Midnight Flyer
Mold: 50
Classification:
Flight Rating Numbers:
Plastic Type:
PDGA Max. Weight:
Disc Color: Clear
Lettering/Hot Stamp: Midnight Flyer 1 Disc Golf Association; © DGA 1979—Black
Date Introduced: 1979
Date PDGA Approved: 01/01/78
Number Produced: Approximately 50
Period of Manufacture:
Special Notes: This is a Midnight Flyer 50 mold hot stamp on a standard clear 50 mold disc. There were 22 sold via a Factory Connection ad in Frisbee World (v7n4).
The following note is from Al Bonopane, penned August 11th, 2020. Al was an employee of the IFA for many years. [I just wanted to offer up a firsthand-knowledge kinda correction to this disc. There were quite a few more than "<10" produced. There were enough of these produced to fill at least one (and probably only one) standard Wham-O 141G bulk shipping box. I wasn't really a shipping guy, but this was the big, divided box (you probably know it) with four stacks of (I'm guessing) 12 discs each, so maybe a box of 48? And I say probably only one box, because if so few have surfaced by now, it was probably the only box. The box was tucked away in the corner of my office for years at the IFA. I don't know when or why or for whom they were produced; discs like that, as you know, are usually hot stamp tests, or the result of mistaken plastic loaded up. That's probably what happened here, since they were never sent out, or claimed by anyone. I can't account for the eventual distribution of the entire box, but I guess I personally did have most of them, and I still do have a good number of these new, unused discs. As per your FDM description, all have the number 1 (one) hot stamp. Hope this helps! Albee]
Contributor(s): Kevin Fuller, Al Bonopane, Mike Hughes
Apple iPhone 7, f/1.8 @ 3.99 mm, 1/30, ISO 20, No Flash 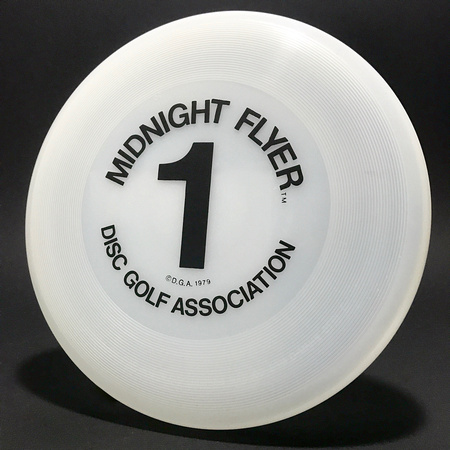